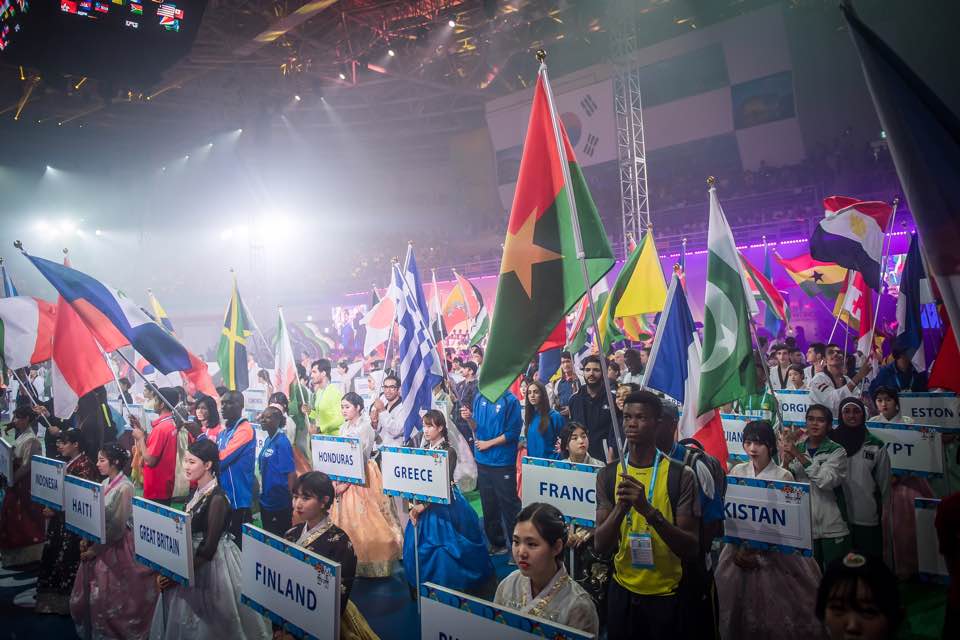 MUJU, Korea (June 24, 2017) – South Korean President Moon Jae-in, in a surprise visit to the first day of the 2017 World Taekwondo Championships Opening Ceremony, spoke of his hopes for sportive and political reconciliation between the two Koreas.

His address preceded the highlight of the championships’ Opening Ceremony – a highly symbolic back-to-back demonstration by teams from the International Taekwondo Federation, or ITF, and the World Taekwondo, or WT. With 183+1 (the “one” denotes a refugee team) nations represented and 1,800 athletes and officials registered, 2017 is the biggest taekwondo World Championships ever, welcoming 17 countries which have never formerly taken part. It also welcomed some very special guests: Moon – the first national president ever to visit a World Taekwondo Championships – and the ITF Team, and an accompanying delegation.

“We have guests who are closest in distance but who have traveled a long way to be here,” said Moon, referring to the ITF visitors.

Moon also expressed his hope that the World Taekwondo would be able to perform at the upcoming ITF World Championships in Pyongyang, North Korea, in September.

Moon was thanked by World Taekwondo President Chungwon Choue. Following Moon’s theme, Choue - who had earlier that day said he anticipates increased cooperation between the WT and ITF to follow the championships, expressed his hopes that the tournament would be a “festival of peace and harmony.” 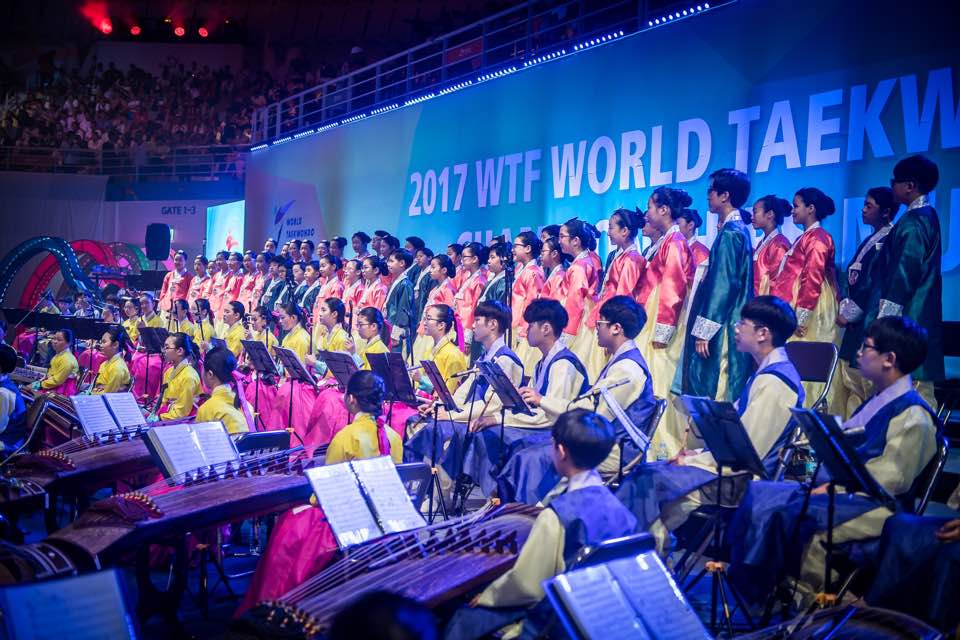 The opening ceremony that formed the backdrop to this sports diplomacy was jaw-dropping.

It opened with video on the overhead screens of taekwondo matches, performances and Taekwondowon - the world’s largest taekwondo-dedicated training facility and the championship venue - and a recorded message about the Taekwondo Humanitarian Foundation, a charity initiative which empowers child refugees worldwide via the gift of taekwondo training.

The first performance was a show stopper: It featured floodlit chime drums being played and dancers gyrating over the floor – which doubled as a screen, over which film of taekwondo history ran, to the aural backdrop of pansori, or Korean opera. The second performance was a live dance/drama covering taekwondo’s recent history, from the first world championships in 1973 to the present – again, making full use of the stadium floor as a screen, with booming music. 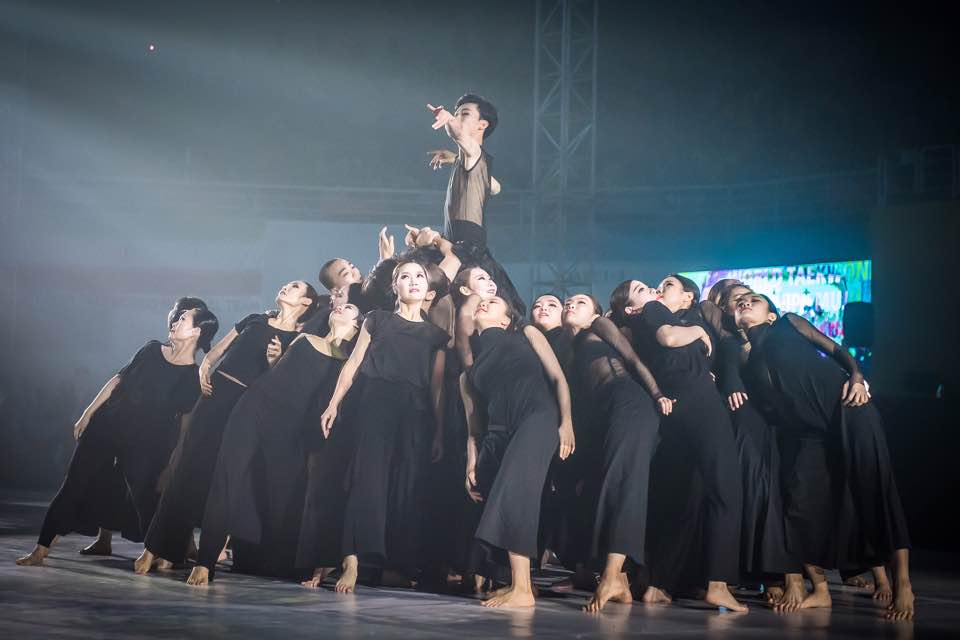 This was followed by a group taekwondo performance, serenaded by a troupe of traditional percussionists whose thunderous rhythm set the tempo for their punches and kicks. It concluded with what may well be a world record of serial jump spinning kick breaks along the length of the stadium floor. Next was more taekwondo-themed dance and a fan dance set to, inevitably, the Korean folk tune “Arirang.”

Then, President Moon was introduced on the VIP stand – he waved to the crowd to wild applause. After he took his seat, a key moment came: The newly rebranded World Taekwondo flag was marched on, before the flags of all participating nations entered the field of play. The crowd rose as the Korean national anthem was sung by a children’s choir. 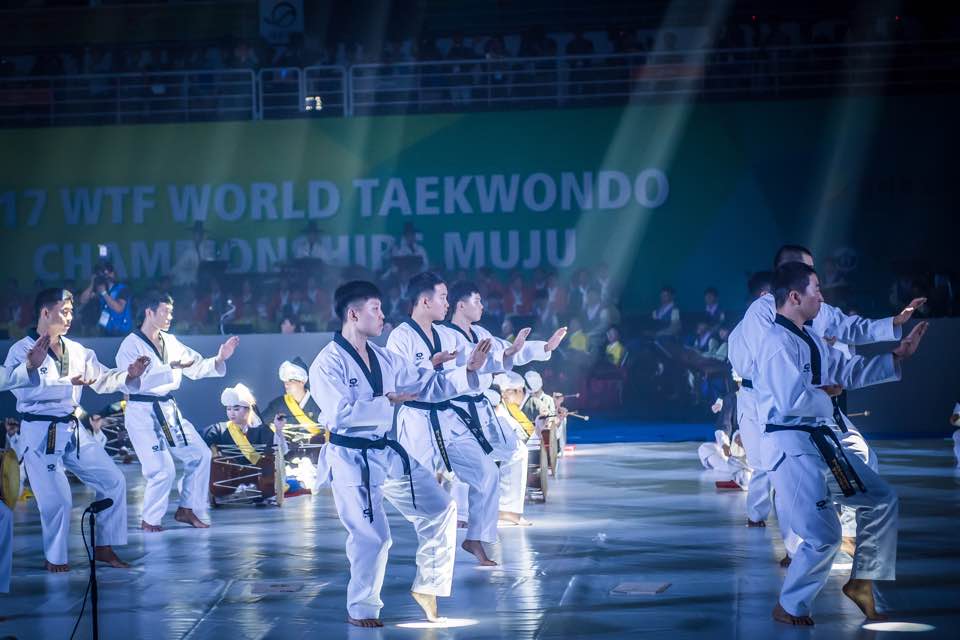 After Moon and Choue had spoken, Chung Sye-kyun, Speaker of the National Assembly of Korea, said, “I am happy to hear your thunder.”

Next, IOC Vice President Zaqing Yu delivered a message from IOC President Thomas Bach, telling the athletes, “All of you are assured to make your mark here in Muju.” Bach himself will visit the championships on June 30 for the Closing Ceremony.

Then the flags exited the stadium and a troupe of taekwondo players performed with a group banners. Next it was the turn of the famous World Taekwondo Demonstration Team to ignite the arena. 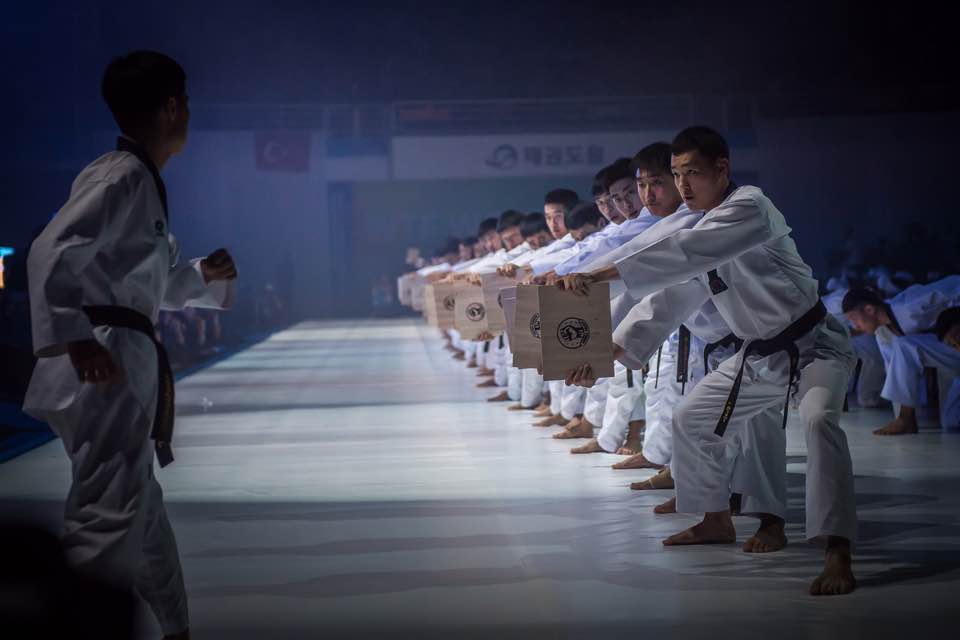 A performance followed using – unusually for taekwondo, a primarily unarmed martial art – oars and sticks. After this, the team surged over the floor in a parade of freestyle leaps, kicks and gymnastics to K-rock. The show ended with high breaks that unfurled the new World Taekwondo banner.

After the stage was cleared of smashed boards, the highly anticipated ITF Demonstration Team entered. 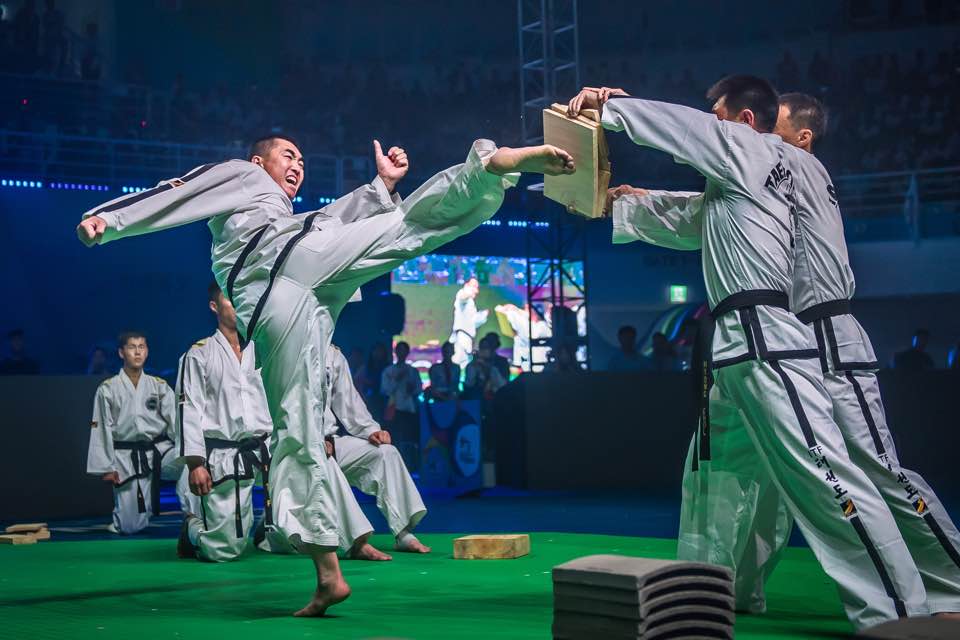 In an unscheduled development, President Moon walked onto the stadium floor and shook the hands of every member of both the ITF and WTF teams, before both teams and assembled VIPs took group photos.

The photos concluded opening ceremony. The championship semi-finals and finals begin tomorrow, and the tournament ends on June 30.