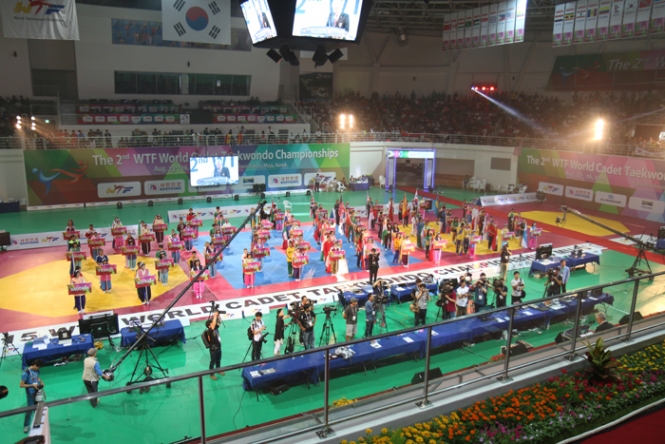 Iran reaffirmed its supremacy in taekwondo as it swept all the five weight categories on the first day of the 2nd World Cadet Taekwondo Championships in Muju, Korea on Aug. 23, 2015.

Iran took both the overall male and female titles at the inaugural World Cadet Taekwondo Championships in Baku, Azerbaijan in 2014.

In the female -29kg final match, which took place at the T1 Arena in the Taekwondowon in Muju, Iran's Fatemeh Ebrahimizadeh beat Russia's Anima Cherchesova for the gold medal. The bronze went to France's Mallorie Dellenbach and Kazakhstan's Alima Kaidarova.

In the female -51kg final match, Iran's Mobina Shakeri took home the gold medal as she outpointed Russia's Polina Arzhevitina for the gold medal. The bronze went to Korea's Ji-yeong Seo and Germany's Stefanie Grunauer in the division.

Before the semifinal matches, there was an opening ceremony of the championships at the venue.

The opening ceremony drew WTF President Chungwon Choue, Thomas Ganda Sithole, secretary general of the ANOCA; Song Ha-jin, governor of the North Jeolla Province and chairman of the organizing committee of the championships; Kim Tae-hwan, president of the Korea Taekwondo Association; and Kim Chong, vice minister of the Korean Culture, Sports and Tourism.

During the opening ceremony, there was a 20-minute performance by the WTF Taekwondo Demonstration Team, as well as a performance by K-Pop girls group EXID.

WTF President Choue said in his opening speech at the opening ceremony, "Under the slogan of 'Vibrant Taekwondo, Dream Tree Taekwondo,' the 2nd World Cadet Taekwondo Championships will be a festival which celebrates the very best of our sport."

"Under the policy of 'One Taekwondo,' taekwondo has become a lovely sport practices worldwide regardless of age, gender and physical conditions," Choue said.

"The creation of cadet championships last year was to provide an opportunity to younger athletes not only to compete in world level but also to exchange friendship one another through understanding and respect, and gain priceless experiences learning culture and history of the hosting country," he said. "One day, these young athletes will become genuine assets of the WTF in senior level as well. The WTF will try its utmost to ensure their dreams come true."

Also attending the opening ceremony were Song Ha-jin, governor f the North Jeolla Provice and chairman of the organizing committee of the championships; Kim Tae-hwan, president of the Korea Taekwondo Association; and Kim Chong, vice minister of the Korean Culture, Sports and Tourism.