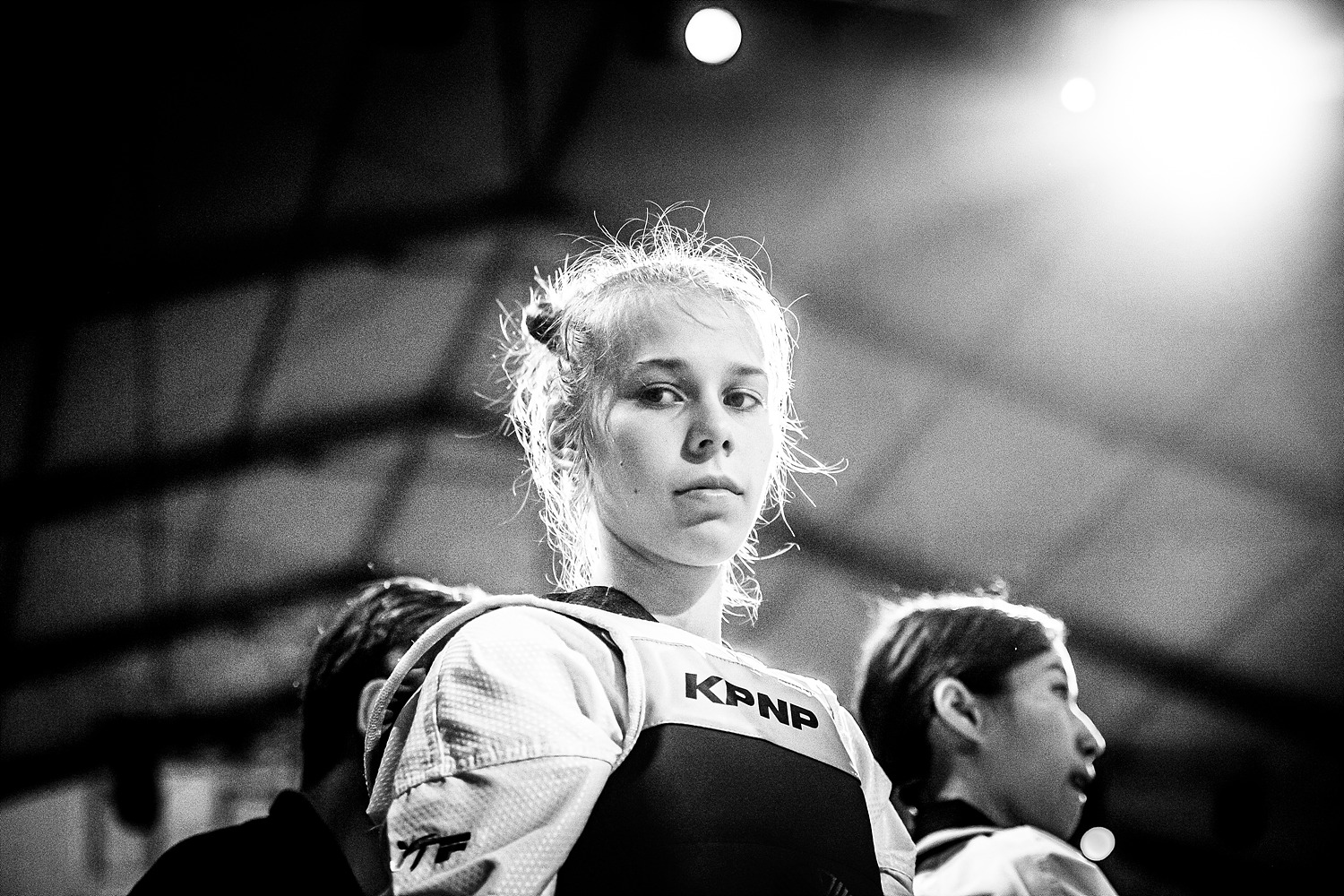 In her first major battle in the senior division, the Russian rookie won decisively against a highly experienced opponent in Rome

The final of the Women’s -49kg category at June’s Roma 2019 WT Grand Prix looked like a foregone conclusion.

In the red: Jae-young Shim, a mainstay of the Korean women’s team, a double world champion. World rank: 4. In the blue: Elizaveta Ryadninskaya of Team Russia, a rookie barely out of the juniors, whose biggest win was a Buenos Aires Youth Olympics gold. World rank: 22.

Everyone expected Shim to win. But in sport, nothing is certain. Round 1 proved to be a cagey business. The Russian had the longer legs – and the most vocal support from her teammates in the crowd – but the Korean had fancier, circling footwork. Both fighters were on the bounce, flicking out front-leg kicks, throwing punches, and falling into the clinch, but neither were committing and neither scored. The first round ended 0-0.

In the second, Ryadninskaya found the range with a big, arcing crescent kick to Shim’s head that netted her three points. Shim responded with kicks to the body and attempts at head shots, but was not able to make the distance against the leggy Russian, who was dominating the center of the mats and keeping her front foot busy. This forced Shim to circle around in defense, and try and break into range to attack – to no avail. The round ended 3-0 to the young Russian. 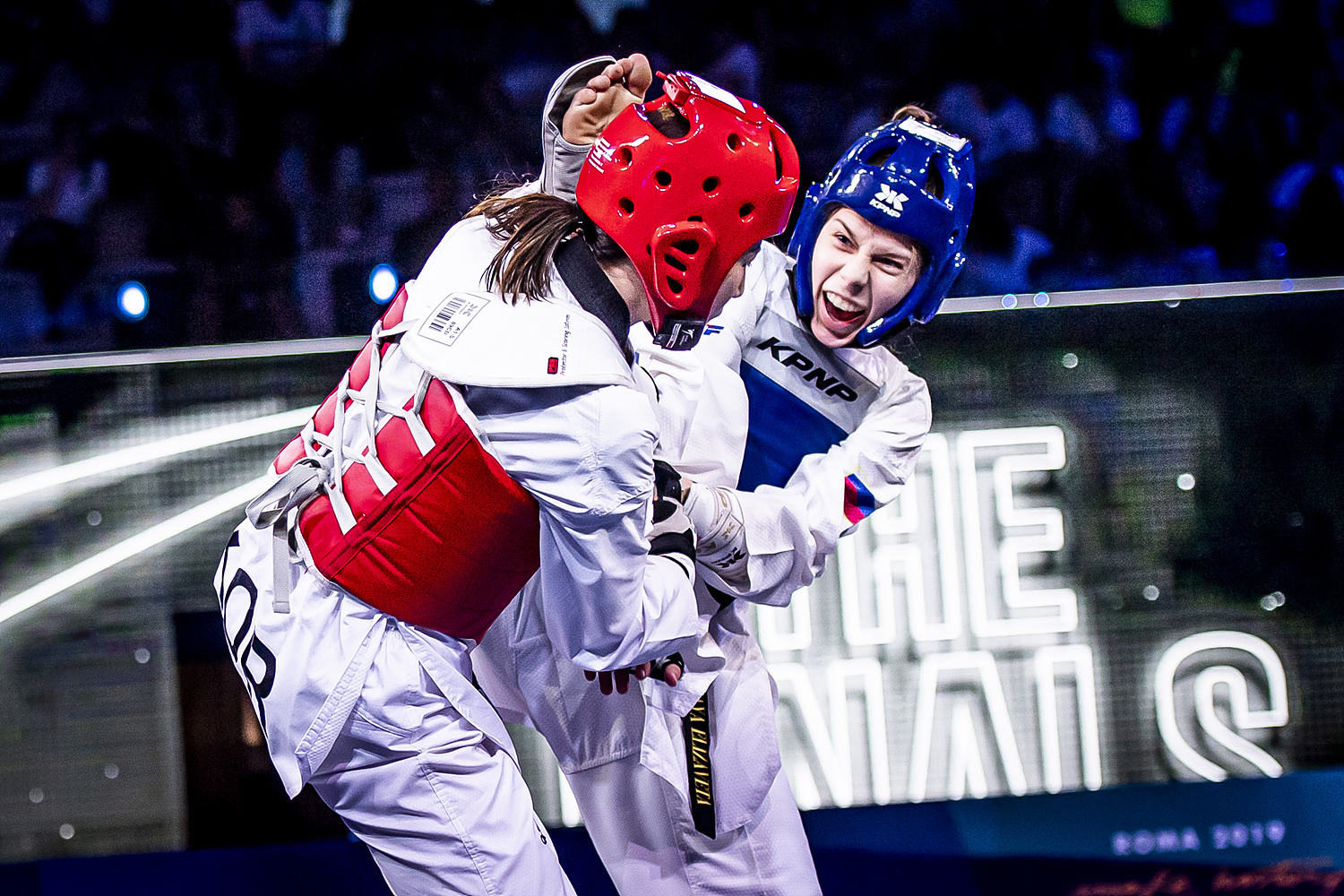 Round 3 would be a classic. It started fast, with both players firing off head kicks. Shim was putting the pressure on, but in a too-fast-to-see-it exchange, Ryadninskaya connected, picking up another point. Shim was now on the attack – moving forward, pushing and kicking off the push. But the Russian’s distance-management was spot on and by attacking, Shim was forced to commit – putting herself in the danger zone.

With one minute, 20 seconds left on the clock, in a close-range exchange, Ryadninskaya’s rear leg round kick snaked up and around to the back of Shim’s head. Hit! Now the Russian was 7-0 ahead.

Shim had to act decisively. She finally round the distance with a front-leg hooking kick that flicked up to Ryadninskaya’s face for three points, meaning that, with a minute left to play, the score was 7-3 to the Russian.

The ante upped once again. Shim unleashed kick-punch combos, while Ryadninskaya continued to ply her long, dangerous crescent kick up high. But that arcing head kick granted Shim an opening: She evaded and buried her fist into Ryadninskaya’s torso protector, gaining another point, raising her score to 4-7.

But her point rally did not last. Shim made a mistake, falling in the clinch, so losing a point on gamjeon. Shim’s coach demanded a video replay. With just 13 seconds left on the clock, both fighters were granted a breather before the final showdown. After the judges checked the slow-motion replay, the point stood, leaving the score 8-4 to Ryadninskaya. 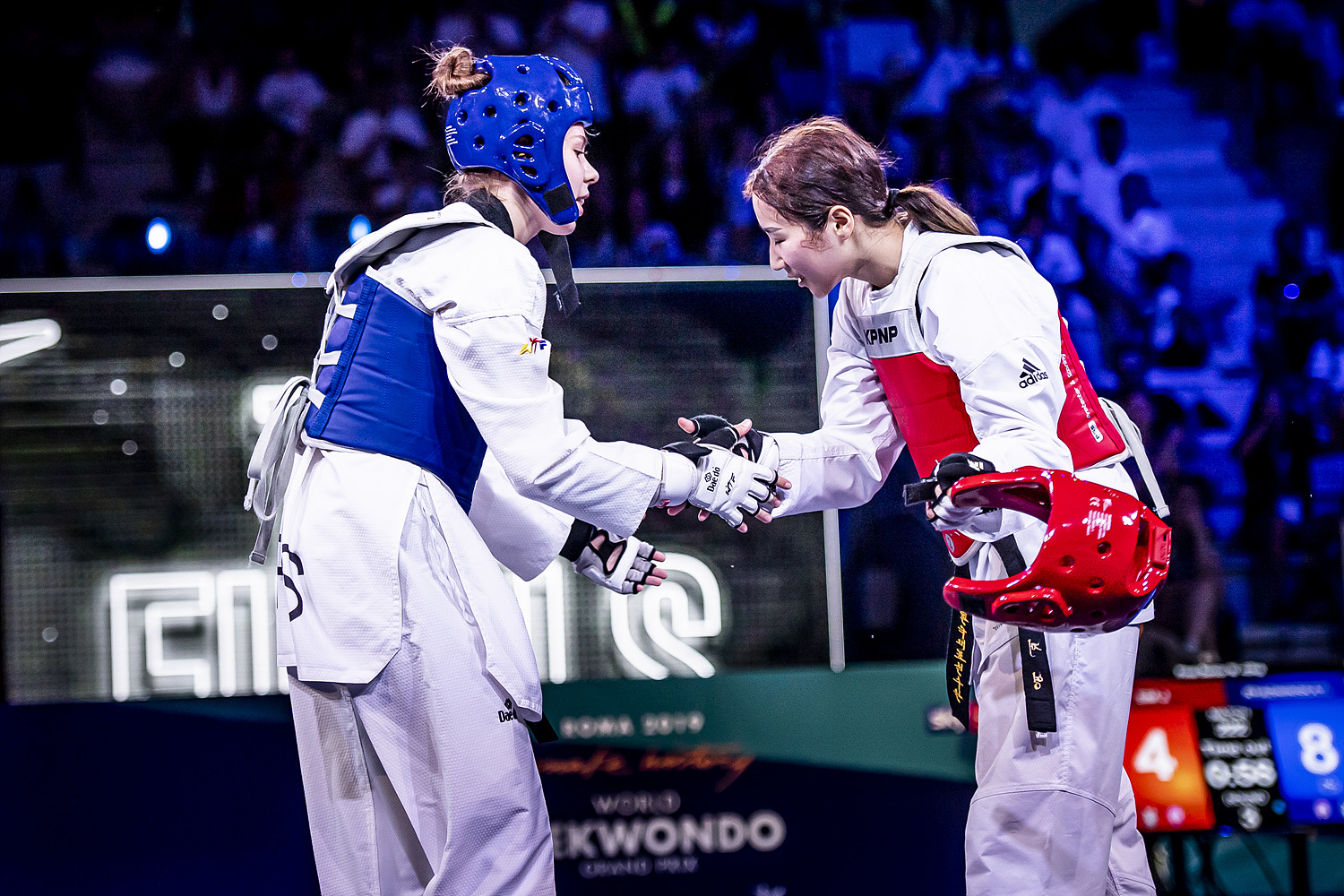 The final seconds were marked by a desperate, all-out attack by Shim, but the young Russian held her ground, gave as good as she got, and took gold with an 8-4 victory over a highly experienced opponent.

Still, Ryadninskaya’s response to the biggest victory of her career was not exuberance: Instead of jubilating, she offered a clinical analysis. “I am very happy about this, but I know that we cannot stop,” she said. “We need to work, correct mistakes, and move on.”

The Moscow native started taekwondo in her second year at school “after my friend showed me a few kicks.” She committed to the sport, found a talent, and started to compete.

In addition to her Roma win, Ryadninskaya won gold at the Youth Olympic Games in 2018, and medaled at the Belgium Open in 2019. These successes, plus her surprise win at the Roma Grand Prix, make the promising young senior a welcome injection of new blood into Team Russia’s squad.

She is well placed. In last year’s fighting season, Team Russia garnered more overall medals than any other team, and is now widely recognized as a powerhouse, with a men’s squad that boasts the deadly trio of Alexey Denisenko, Vladislav Larin and Maksim Khramtcov. 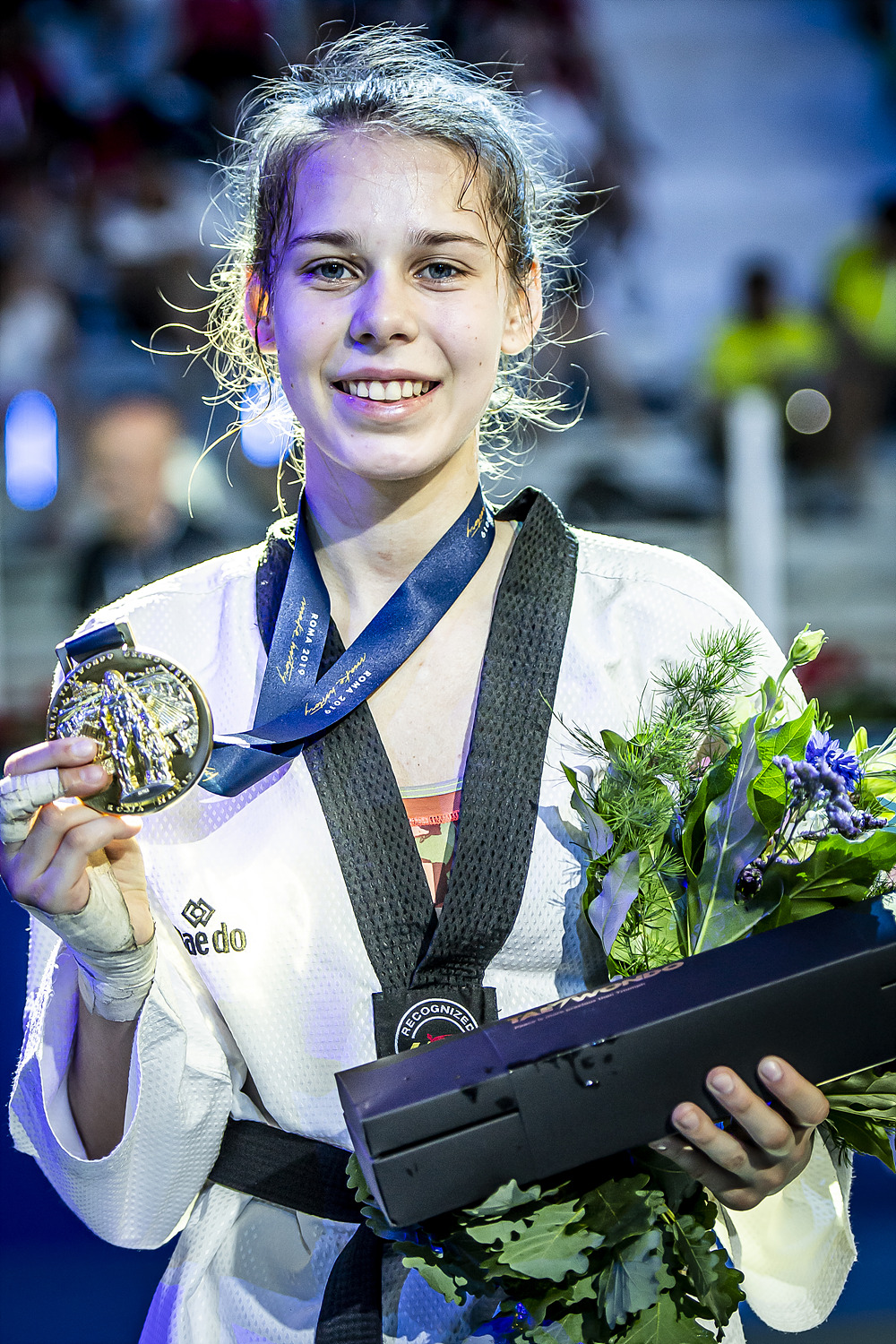 What is behind Team Russia’s rise? “I think because the team is very close-knit, has a great desire to work,” she said. “Also, the coaching staff is very strong, ready to support and guide everyone.”

Russia is also one of the friendliest teams in the game. “All the guys of the national team are excellent, friendly, and responsive,” she said. “I’m good with everyone!”

Her favorite fighter at present is fellow Russian Vladislav Larin, but on the women’s side, she admires Team Great Britain’s double Olympic gold medalist. “I love the work of Jade Jones: She has strong kicks, the right tactics, and character,” Ryadninskaya said. “Despite all her merits, she does not stop, she is quiet and does not elevate herself over others.”

“I’m interested in taekwondo; I want to connect my future with it,” but in a nod to her singing aspirations added: “My dream in the future will get on [audition show] ‘The Voice.’”

Despite her young age and competitive successes, Ryadninskaya’s feet are firmly planted on firm ground. Asked to name her best-ever fight, she responded: “I can’t say it as there are no perfect fights… in every fight, there are mistakes and misses.”

In the near-term, she is concentrating on “the next competition.” In the mid-term, she is eyeing Tokyo 2020. Beyond that, she is staying mum.

“It is very difficult to talk about plans, as they depend not only on me,” she said. “But I plan to continue to be engaged and to put all of soul into this sport.” 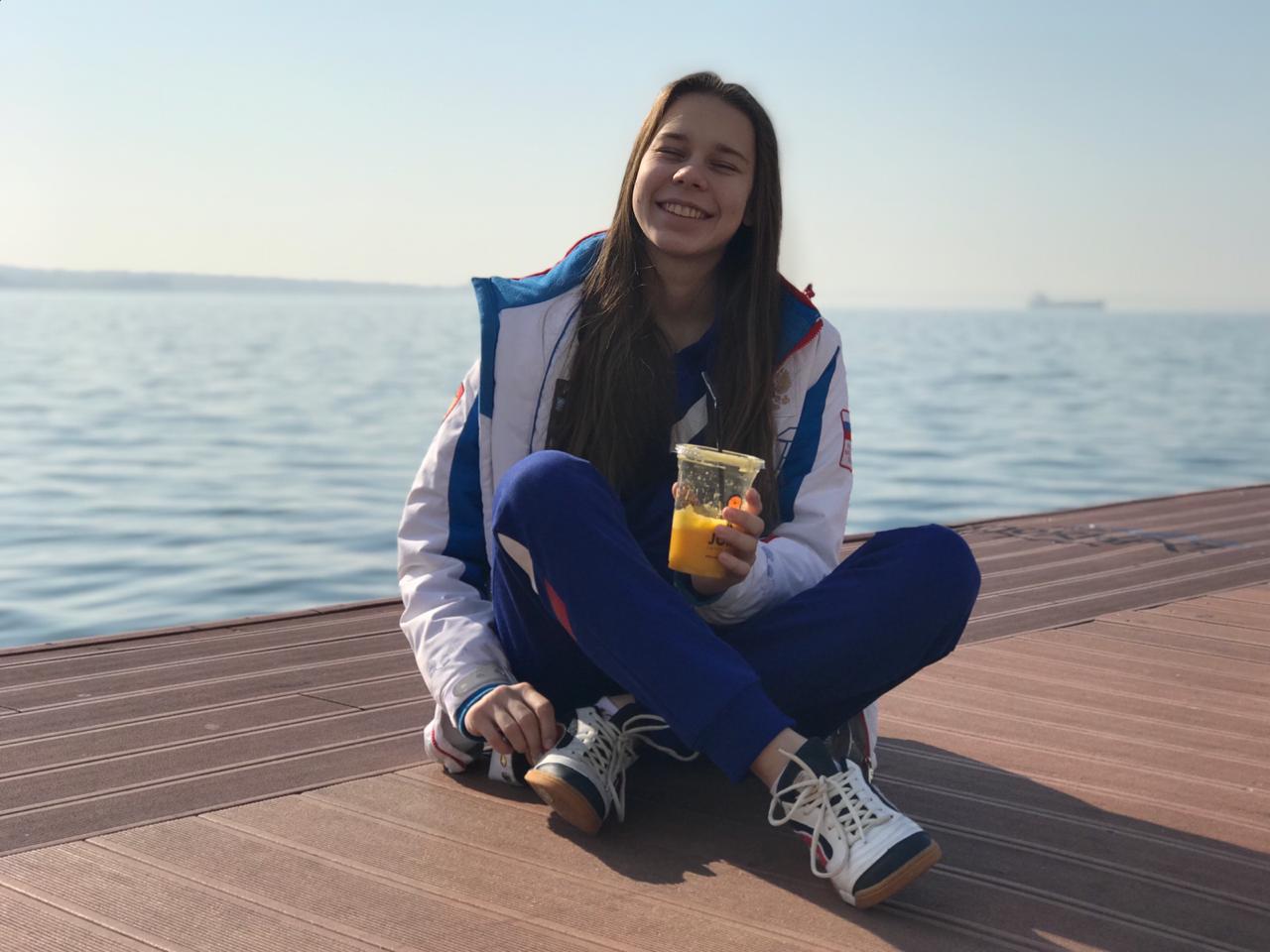