It was a historic achievement for Lee, who captured his 10th Grand Prix title - a record un-equalled by any other fighter, reinforcing his reputation as perhaps the most dominant fighter in the sport today.

The action took place in the Taoyuan Arena in Taoyuan City, with the Men’s +80kg, Women’s -67kg and Men’s -68kg divisions up for grabs. Some 221 athletes, fighting for Olympic ranking points, prize money and medals have converged upon Chinese Taipei from 44 countries in this, the third edition of the 2018 Grand Prix series.

The Taoyuan event is the first Grand Prix hosted by Chinese-Taipei. The invitational competition is designed to sharpen the skills and offer media exposure to the top, Olympic-ranked athletes in the game with a regular calendar of premier-league events.

In the first semi-final, Vladislav Larin of Russia took on Mahama “It’s Cho Time” Cho of Team GB. In Round 1, the two were spring-loaded in the center of the mats exchanging, conservative shots. The referee demanded action, but though both were landing, neither was scoring. Round 1 ended 0-0. In the second, both unleashed high kicks that drew gasps from the crowd, but the round also ended scoreless. Round 3 continued in similar mode,  before a flurry saw the Russian driven off the mats: one point for Cho. Then Larin scored to the body, going up 2-1. Now, it was a fight. Having found the distance, Larin landed again and again, going 6-1 up in rapid succession. Cho tried a spin kick but was off the mats. 7-1. In the final 15 seconds Cho uncorked punches and spin kicks, could not connect, and the bout ended 9-2, Larin.

The second semi-final pitted China’s Hongyi Sun against Gabon’s Anthony Obame.  The Chinese had the height; the African looked stronger. In another cagey first round, Obame scored with a punch as Sun advanced. The Chinese did most of the work, but Obame looked dangerous on the counter. Sun lost another point for grabbing, then tumbled. Round 1 ended 3-0 to Obame. Round 2 saw livelier action, and Obame held his lead, 4-1. Sun landed another punch, to go to 2-4, but suffered a penalty at the end, giving the round to the man from Gabon. Round 3 started with a fierce exchange and a penalty for Obame. On the edge of the mats, the Chinese raised his score to 5-5; this was now anyone’s fight. A thwacking kick put Obame ahead, before Sun scored to the head. The final 35 seconds were all action. Huang landed a punch, taking the board to 9-9; it ended on that score. In golden point, neither scored; Obame won by virtue of fewer penalties.

The final matched Larin against Obame. In a tight first round, both fighters mixed front and rear leg kicks, while engaging in psy-war. It ended 0-0.  In Round 2, Larin landed a powerful-sounding round kick to the torso. The second ended on that score. Still, anyone could win: There was just one body kick on the board. In Round 3, Larin employed spinning back kicks, while Obame was penalized. Larin landed again and the match ended 6-1 with a gold for Larin. At the conclusion, the delighted Russian heavyweight let out a roar of victory. 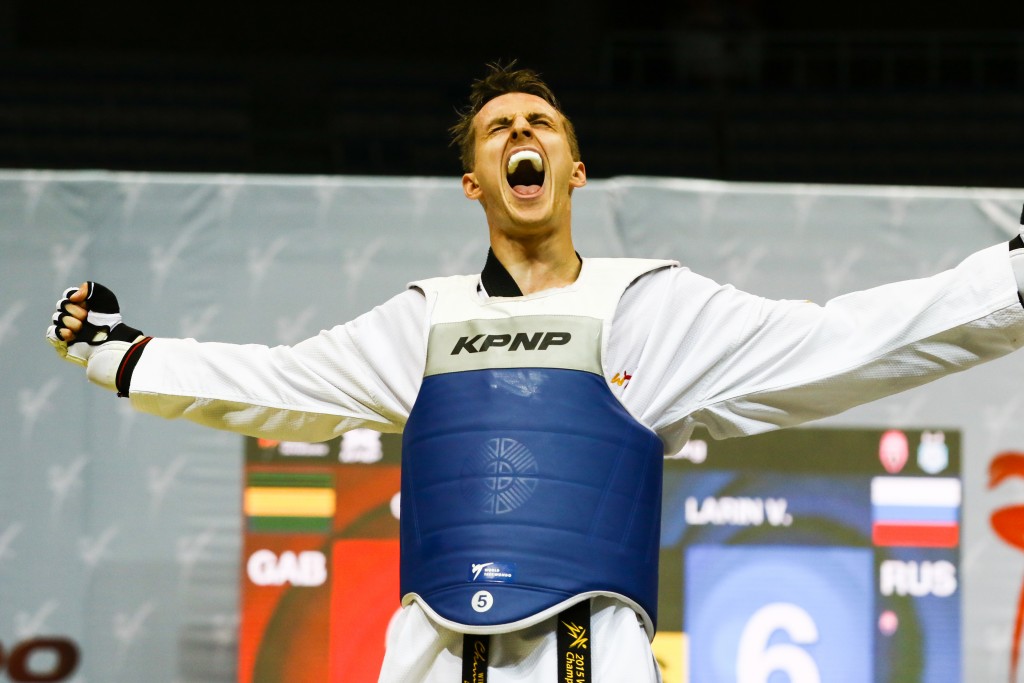 In the category’s first semi-final, Korea’s 2016 Rio gold medalist Hyeri Oh did battle with Paige “McFierce” McPherson of USA. These two have clashed many a time.  Oh started off looking more dangerous, but the American landed first, then in a flurry, turned Oh and struck again and again. Round 1 ended 6-1,  McPherson.  In the second, Oh suffered two penalties. With the board at 9-1, Oh turned to her coach in frustration. The American was dominating, forcing Oh to the edge of the mats, and Round 2 ended 11-2. But Oh is a master at come backs, and she surged out in the third, racking up a string of points in a remarkable performance. She dragged her score up with head and body shots, before MacPherson scored to the body from the clinch. With the board at 13-10, MacPherson held out and ended with a 13-11 victory.

The second semi saw Korea’s Jan-di Kim battle Polina Khan of Russia (who was fighting under a particularly paternal coach – her father). The Korea has an ambidextrous kick attack, which she mixes with punches and went 2-0 up, before dropping Khan with an accidental face punch. But the Russian was game, combat continued and Round 1 ended 2-1 to Kim. Round 2 was messier with push work. Kim looked more dangerous with kicks and punches while the Russian tried to land an arcing head kicks in the clinch. Then Khan landed twice to the body in quick succession, going 6-2 up before falling. The round ended 6-3 to Khan. Round 3 started with Khan scoring to go 7-3 up, then 8-3. Kim landed another kick to the body, but was penalized for holding, leading to an appeal – which was accepted. The board was now 8-5 to Khan. With one minute left, Khan lifted her score to 10-5. In a flurry of intense, edge-of-mats action, Khan fell. The score went to 10-6, then 11-6. With 40 seconds left, Kim was trying spin and head kicks, forcing Khan out, 11-7.  By the last 20 seconds, both girls looked exhausted: This battle royale ended 13-8 to the Russian.

The final: Russia versus USA. The first round started with foot fencing, then Khan scored twice to the head before falling. The round ended 6-2 to Khan.  In the second, Khan seized another point up close, and the two exchanged high kicks. There was more up-close action, with McPherson closing the point gap, before Khan landed again, ending the round 7-3. In Round 3, the American opened fire on the high line; Khan responded with pushes and high kicks.  With the score at 7-4, McPherson, needed to raise her points. Then the Russian was penalized and it was 7-5 with 35 seconds left on the clock. With 10 seconds remaining, MacPherson equalized with a body kick just when she needed it. It ended 7-7, so went to golden point. Neither scored; giving McPherson the win penalties - ending a long gold medal drought in the Grand Prix series for Team USA. 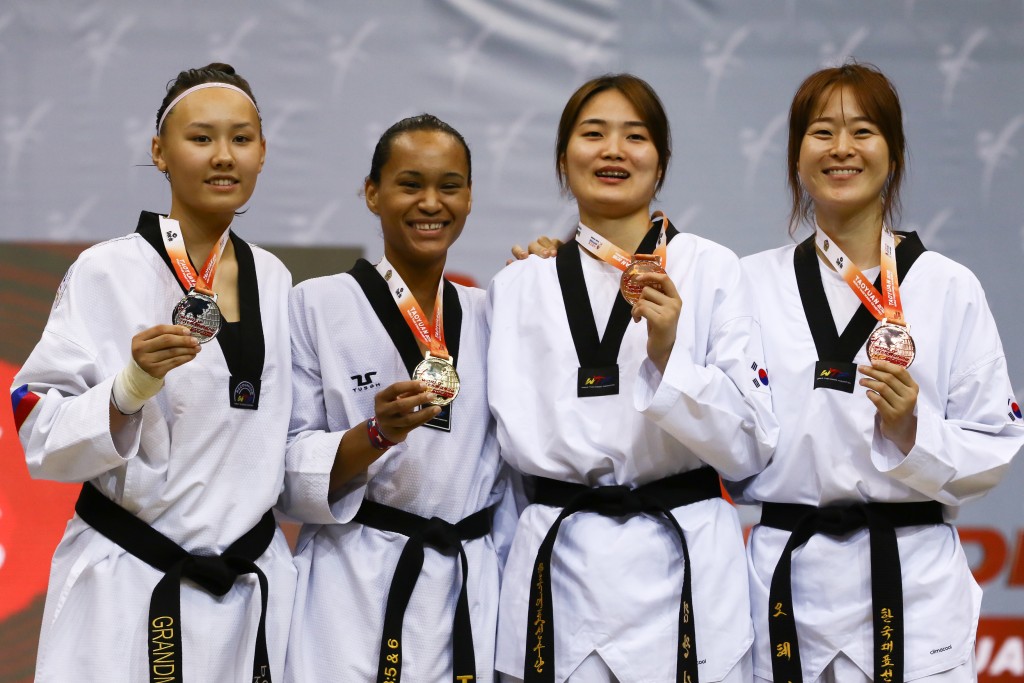 The first match of the semis featured Team Korea’s world-ranked number one and triple world champion, Dae-hoon Lee and Brazil’s Edival Pontes. The phenomenally popular Lee, fresh from Asian Games gold, was applauded as he stalked into the arena. He opened the scoring with a body kick, 2-0, then, mixing body kicks and ax kicks, scored again, 4-0. Pontes did well to land a downward round kick while Lee was firing an upward cut kick and Round 1 ended 2-4.In the second, Lee attacked to the head and drove Pontes off his feet and off the mats, going 5-2 up, then the Brazilian was penalized, 2-6. Lee was now attacking fluently to body and head, keeping Pontes on the back foot and dropping him in the clinch: A masterly exhibition of ring craft and technique.  Round 2 ended 15-3 Lee. Pontes was slow to come out for the third. Lee eased off the pressure, and the Brazilian attacked with lively kicks and spins. Lee danced, then resumed his attack connecting and again - including with a from-nowhere round kick to the face, putting him up to 24-4. It was all-out action as Lee went into attack mode and literally chased Pontes. Thwacking kicks and spinning back kicks drove Pontes off the mats. The match ended 29-8 to Lee after a really nice match of long-range, clean taekwondo.

The second semi pitted Iran’s Mirhashem Hosseini against Chinese-Taipei’s Ju-yen Huang. The stadium exploded with applause when Huang appeared. The local man attacked with a fast front leg, and Hosseini responded with a range of techniques. But neither landed, ending Round 1 0-0. In the second, Hosseini went one point up when Huang fell - then the Iranian fell. After these clashes, the board was reset at 1-1. Huang drew ahead 2-1 – where the round ended. In the third, Huang varied his attack and the Iranian tried to score from the clinch, but it was messy stuff. Huang fell. With just 23 seconds left, the board stood at 2-2. In the final 10 seconds the Iranian landed an absolutely spectacular ax to the face from in the clinch – the kick of the night - going 5-2 up. Huang managed a final point, but it ended 6-3, and a win for Iran.

So, the final: Hosseini versus Lee. Hosseini played a cagey game and Lee only found the range in the last 30 seconds with an audible kick to the torso for two points. But the Iranian was not overawed by Lee’s awesome rep, and manhandled him in the clinch; in the final seconds, he clawed back one point and Round 1 ended 2-1. In the second, Hosseini landed a screaming punch, going to 2-2.  Clearly, Lee was finding him a difficult opponent. Although the Iranian was penalized, Lee was not scoring his usual machine-gun bursts of points. The round ended 4-4.

In the third, Lee moved ahead after the Iranian leg blocked and fell, going up to 5-4. A very clean side kick gave Lee another two points before he almost ate Hosseini’s ax kick to the face – he evaded by a whisker. The Iranian was penalized for holding, but landed a heavy punch. In the final ten seconds, both went hard at it, kicking in close range and fighting on the edge of the mats.  Lee was penalized for holding and the roaring Iranian charged. The ferocious struggle ended 13-9 with yet another victory for Lee - but a strong showing from Hosseini.

That ended the evening. Action continues at the Taoyuan Arena tomorrow when the Women’s -57kg, Men’s -58kg and Women’s +67kg categories are contested.