Medals were up for grabs in the female -52kg, male -59kg, female -55kg and male -63kg categories. In what were widely seen by taekwondo pundits as the most competitive weight divisions, the crowd in the Bill Copeland Sports Center witnessed some scorching battles.

Also on Day 3, the unsung heroes of this (and, indeed, every) tournament – the referees – were recognized. The 83 referees officiating were awarded participation certificates from WTF President Dr Chungwon Choue.

The final of the female -52kg category saw Chai Ling Lo of Chinese Taipei go into battle against Ekaterina Kvartalnaia of Russia. Both girls looked well matched in physique. The first round started slowly, with the two exchanging probing kicks at range and manoeuvering in the center of the ring, but with neither making contact. The round ended with the board empty. In the second, Lo opened the scoring with a cut kick to the body, going one up, then two up, in close-range clashes. Kvartalnaia looked like she connected with a chopping kick to Lo’s face – but no score. Round 2 ended 2-0 to Lo. The third stared with both girls fighting with more conviction and both supporting contingents making a lot noise. In a clash of round kicks, the Russian finally scored, going 2-1. With 23 seconds on the clock, Lo landed a an ax kick to the Russian’s face and the Russian, in mid-kick herself, dropped to the mats. A video replay was called for and accepted, putting Lo 5-1 up. The final seconds were furious as the Russian launched an all-out offensive.  The noisy Chinese Taipei supporters counted the last seconds down and despite her last-minute assault,  Kvartalnaia had to settle for silver, while Lo won gold.

Ikra Kayir of Turkey and Laetitita Aoun of Lebanon both won bronzes. 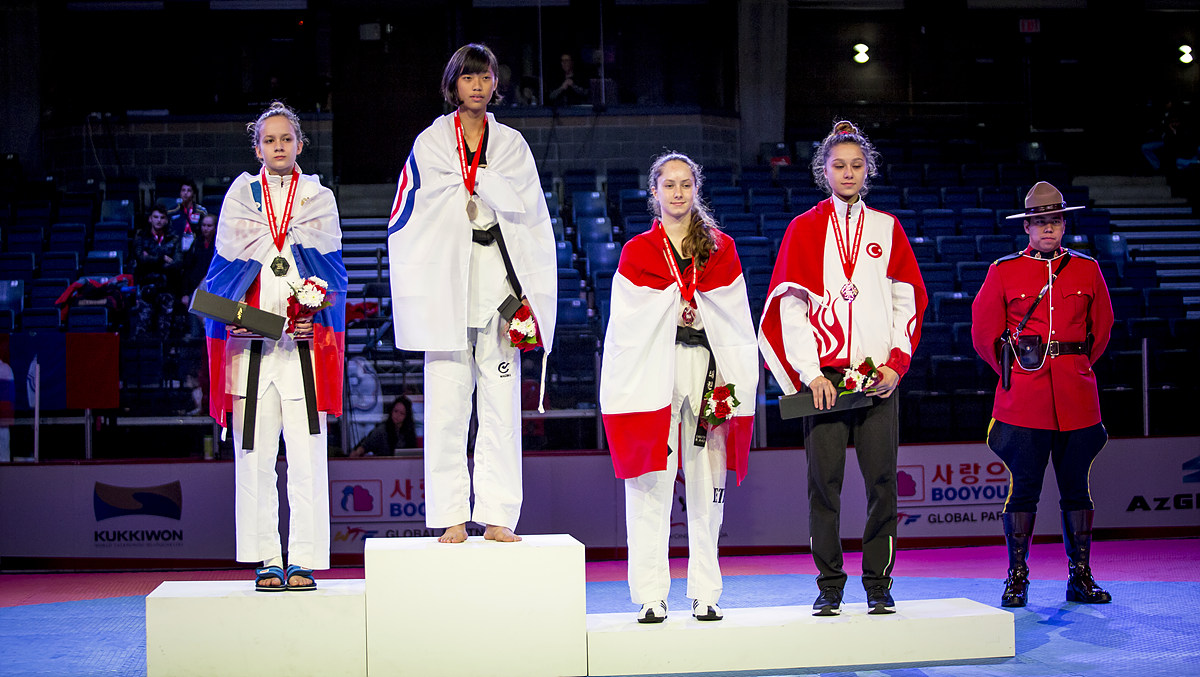 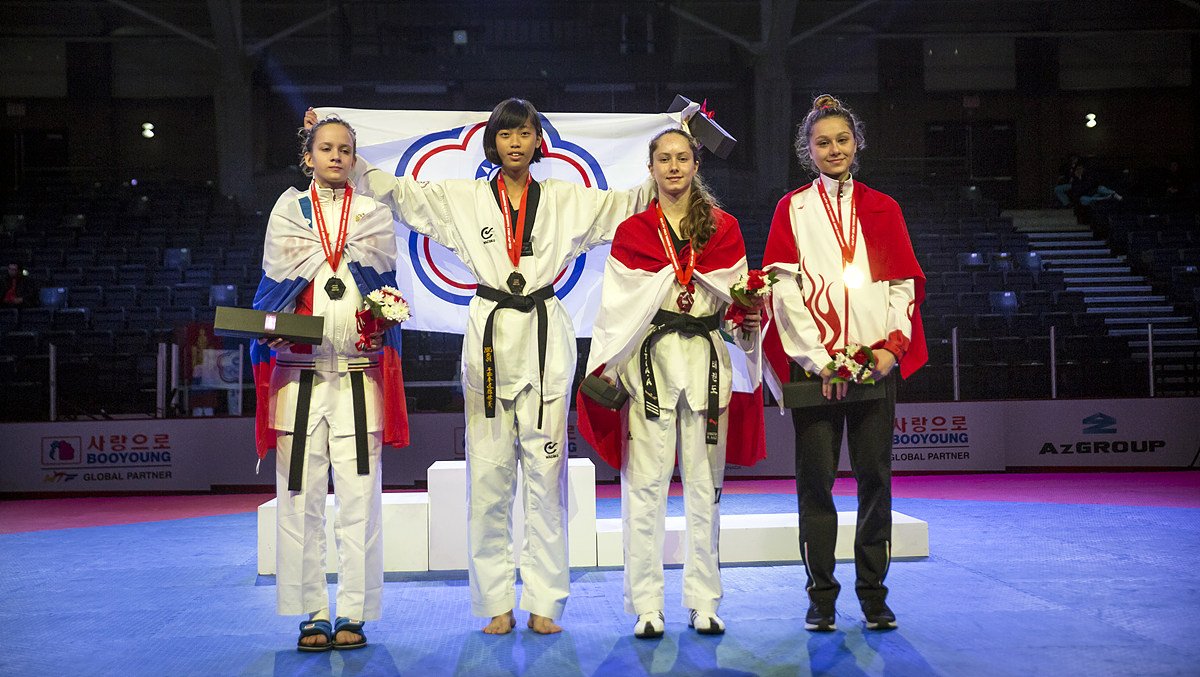 The finals of the male -59kg category pitted Hakan Recber of Turkey – who had survived a very punishing match against Russia’s David Nazaryan in the semis – faced off against Omar Lakehal of Morocco, whose spectacular style had set the stands on fire in the semifinals.  Lakehal had a slight height advantage, and looked lighter and faster on his feet than the Turk. As battle commenced, Recber took his stance in center stage while the Moroccan danced around him, displaying some stylish lateral footwork – then seized a 3-point lead with a spinning heel kick to the head. The Turk struck back with a punch to the body for one point, then scored with his own head kick. The scoreboard was not left idle for long: Lakehal caught his man with a spinning back kick that dropped him on the edge of the mat. Round 1ended 6-4 to Lakehal. In the second, tempo stepped up further, with both fighters jumping and spinning. Neither was willing to concede the center of the ring, generating some close-range clashes and clinches. The Turk added to his score, going 5-6. His tactics were sound: He closed inside the Moroccan’s dangerous kicking arc, clinched, then kicked, fast, off the break. He landed another; board climbed. By now, several supporters were literally shouting themselves hoarse. The second ended with Lakehal maintaining a narrow 7-6 lead. As the bell rang on the third round, this excellent match could still go either way. In the evening’s most cinematic moment, the Turk landed a jump spinning heel kick – one of taekwondo’s most technically difficult moves, one that is more common in demonstrations than in actual fights – to Lakehal’s face, taking his score up to 10. The Moroccan returned fire with a punch, taking the board 9-10. Both fenced with cut kicks, then the Turk landed a round kick to the head, taking his score to 14-9. By now, he had very clearly round his range. He lifted his points to 16 as his opponent, trying a jumping ax kick, crashed to the deck. With the action now up-close–and-personal, the board was accumulating points too fast to count. In a torrid clinch, both boys hit the deck – and in a nice moment of in-the-eye-of-the-storm sportsmanship, helped each other up. Round 3 ended 18-12 to the Turk, who seized gold after a brilliant performance, leaving the popular Moroccan with the silver. At the conclusion to their epic match, both lads embraced on the field of play. 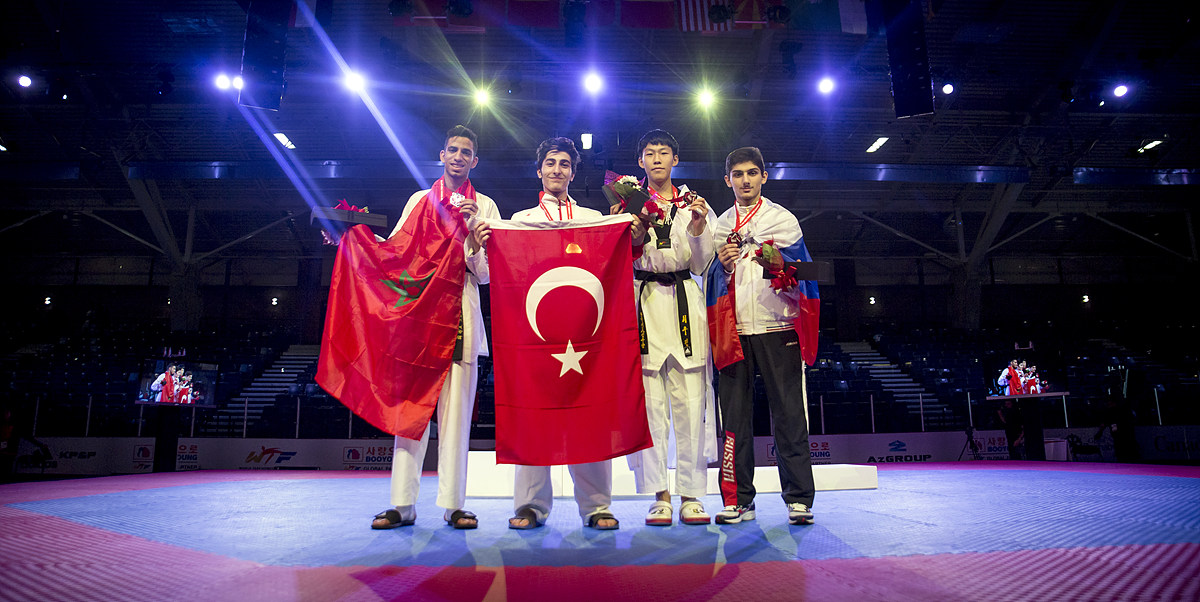 In the female -55kg final, the impressive Lijun Zhou of China took on Kristina Beros of Croatia. Things stared with a touch of comedy – Beros appeared on the mats without her helmet, generating laughs in the stands and forcing her doctor to run off and find it. As the fight got underway, Croatian fans were in fine vocal form, with claps, cheers and  a cheeky “Areeba, Croatia!” But it was Zhou who struck first, with a lightning fast round kick to the head, lighting the board up with three points. The Croat struck back with a body shot, and the round ended 3-1 to Zhou. In the second, Beros clawed back a point, then another, taking the score 3-3, holding off the Chinese fighter’s wickedly swift ax kick, and even ducking under it. The Croatian’s game plan seemed to be working, as she struck under Zhou’s ax kick with a cut kick and over it with a punch – but the Chinese athlete must  surely have one of the fastest and most deceptive legs in the game, and she connected to Beros’ head again, going 6-3 up. The second ended 6-3 to Zhou. In the third, Beros flew into the attack, putting her opponent on the back foot – at one point, the Chinese girl, taken aback by the ferocity of this assault, turned her back on her opponent, and Beros raised her score up with a head kick. Remarkably, Zhou recovered her equilibrium almost immediately and replied with another ax kick, then there was a short break in the action courtesy of a video replay request from the Croatian coach. When battle resumed, both girls were firing head kick against head kick; the board climbed 13-10 to Zhou.  It was a duel of powerhouse head attacks – round kicks from the Croatian, ax kicks from the Chinese – as the score went 15-13 to Zhou, with 30 seconds left. Both girls were playing for keeps, but it was Zhou who was the more accurate and the board finished at 18-13 after a high-kicking, high-scoring. seesaw match. Zhao captured gold, leaving Beros with a well deserved silver. 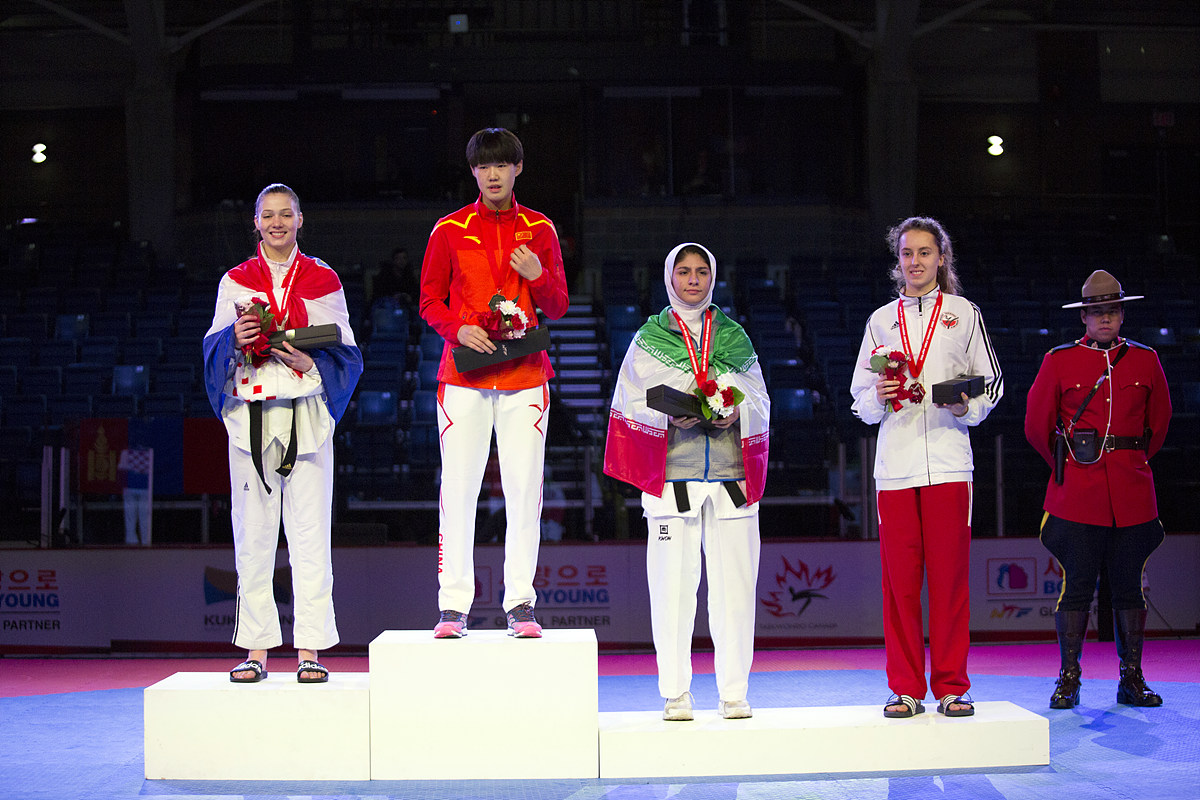 The finals in the male -63kg class pitted Nikita Pushanko of Russia against Amir Mohammad Bakhshi of Iran. From the start, Bakhshi looked stronger, though the Russian had a slight height advantage. And from the opening bell, the Iranian’s strategy was crystal clear: He was going to force the Russian onto his back foot and onto the perimeter of the mats. Both lads showed a high work rate with kicks, and were both trying to intimidate each other, but there were few clinches, and the action was largely flowing. Even so, neither connected and the round ended scoreless. The second continued in much the same way, with both cancelling out each other’s kicks, and neither managing to get their legs to full extension. The Iranian looked more dangerous with his chopping kick, but could not score. Finally, Bakhshi added a point as the Russian went over the perimeter, then added a second with an almost nonchalant-looking cut kick to the torso. Round 2 ended 2-0 to Bakhshi. In the third, it was yet again the Iranian who pressed forward, and yet again the Russian who was forced back to the edge of the mats. The Iranian added a third point with his cut kick while the frustrated Russian was unable to find space to extend his back kick, spin heel kick or ax kick. By the last 30 seconds, Pushanko was looking tired and had still not found a way to overcome Bakhshi’s forward pressure. Only in the last 10 seconds did he force the Iranian backward, but the round – and match – ended 4-0 to Bakhshi, with Pushanko taking silver. 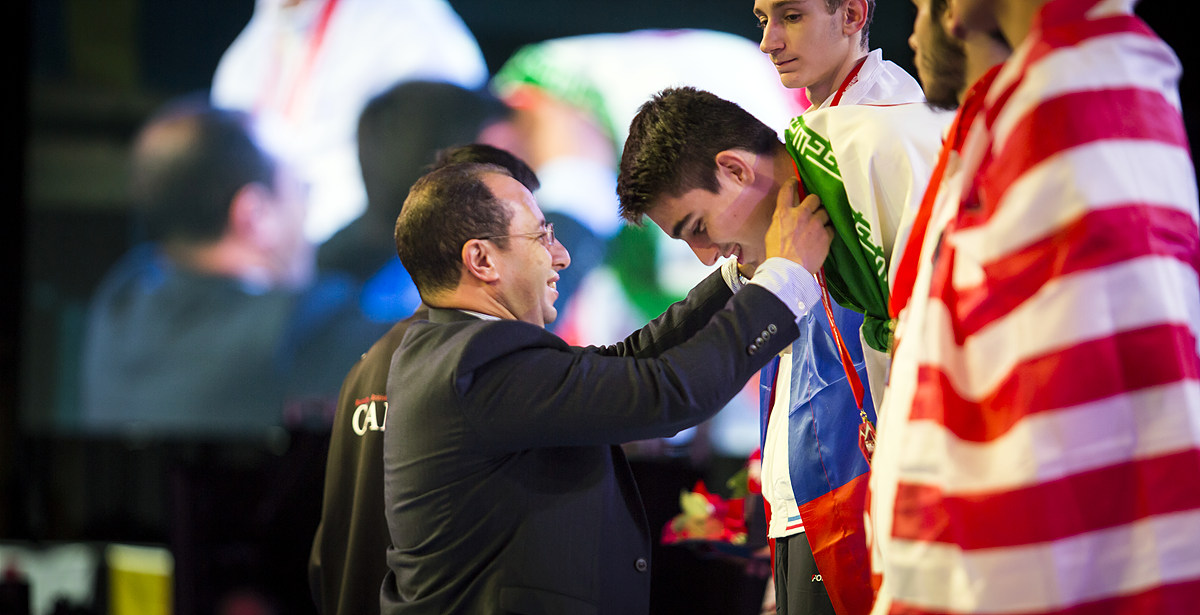 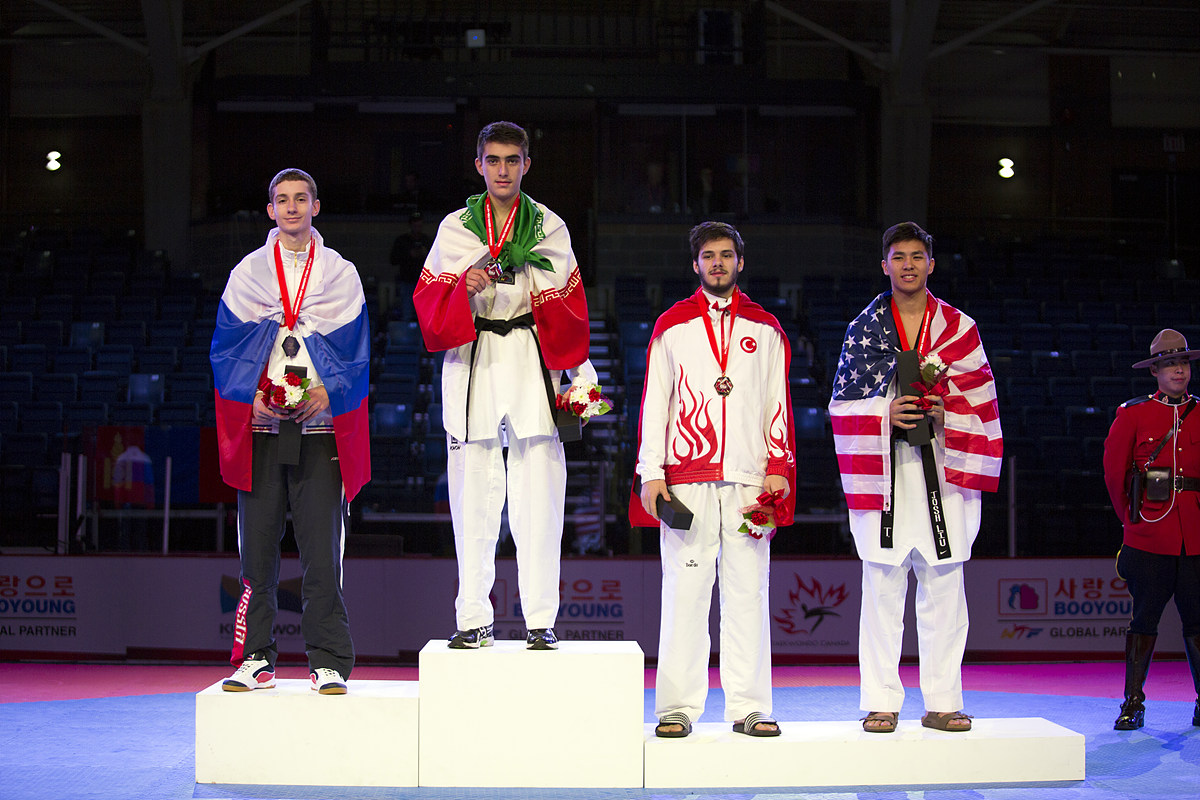 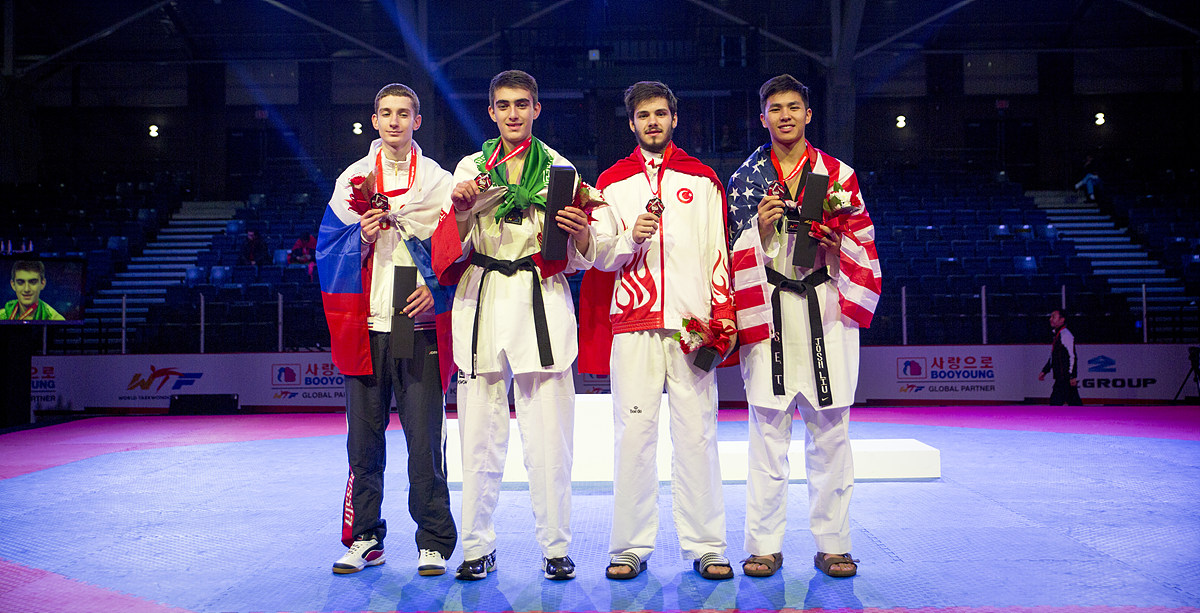 Action resumes in the Bill Copeland Sports Center on Day 4, the penultimate day of the championships, tomorrow.

*More photos of Day 3 will be updated soon.
*Find RESULTS