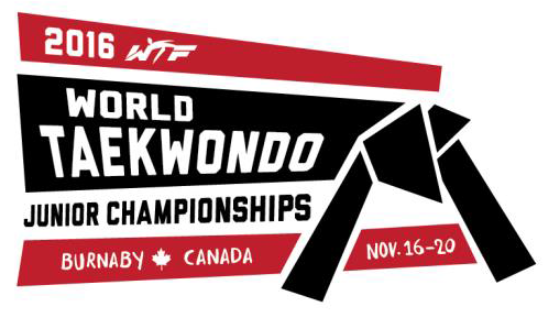 Taekwondo Canada is pleased to announce the world’s top taekwondo junior athletes will be competing in Burnaby, British Columbia from November 16-20, 2016.

BURNABY, BC, Canada (February 22, 2016): The world’s top martial arts sport (and an Olympic sport since 2000) is bringing international competition to Burnaby. The World Taekwondo Federation awarded Burnaby, Canada the right to host the 2016 championships at its extraordinary council meeting held in December in Mexico City.

The World Taekwondo Junior Championships will be hosted at Bill Copeland Sports Center in Burnaby, and is an exciting showcase of the sport’s future, with athletes between the ages of 14 and 17 participating.

Organizers anticipate over 800 athletes from 100+ countries will compete for top honors, across ten different divisions, with both male and females competing. The event is expected to generate a $4 million economic impact in Burnaby and throughout the province.

Taekwondo Canada’s president, Wayne Mitchell, sees some excellent opportunities for showcasing and growing the sport in Canada. “Bringing the best of the world to our country gives us a platform to build awareness of our sport in Canada, and grow it.” He went on to say, “We are very thankful to the world Taekwondo Federation for this opportunity. We intend to seize it and raise the bar on event execution and build a long lasting legacy for the sport in Canada.”

City of Burnaby Mayor, Derek Corrigan, is thrilled that this event is coming to Burnaby: “Taekwondo is a sport that garners international interest,” says Mayor Corrigan, “and Burnaby is well-positioned to ensure that the thousands of people locally and worldwide who follow and participate in the sport will see the 2016 World Taekwondo Junior Championships featured here to their best advantage. Our city is a hotbed of sporting excellence. We have hosted many national and international sporting events, including the World Police and Fire Games, the FIFA Under-20 World Cup, Rugby Canada’s Pacific Nations Cup, and the Pat Quinn Hockey Classic. We have experience, a top-notch venue, the support of the local taekwondo community and the enthusiasm of our citizens – everything we need to produce a first-class competition.”

Event organizers are excited to develop a milestone event that promotes the sport of taekwondo in Canada and introduces it to new audiences, as well as strengthen the junior programs in the community. Competition details and schedules will be released in the coming months.