MUJU, Korea (May 6, 2016) – The World Taekwondo Federation’s Council finalized its preparations for the Rio de Janeiro Olympic Games in a special meeting held at the Taekwondowon dedicated training facility in Muju, Korea, pledging to bring a carnival spirit to the taekwondo competition.

“The WTF is aiming to match the vibrancy and energy synonymous with the Brazilian host city,” said WTF President Chungwon Choue in a speech to the Council. “We are confident that the taekwondo competition in Rio will deliver more excitement, more action and more drama than ever before.” 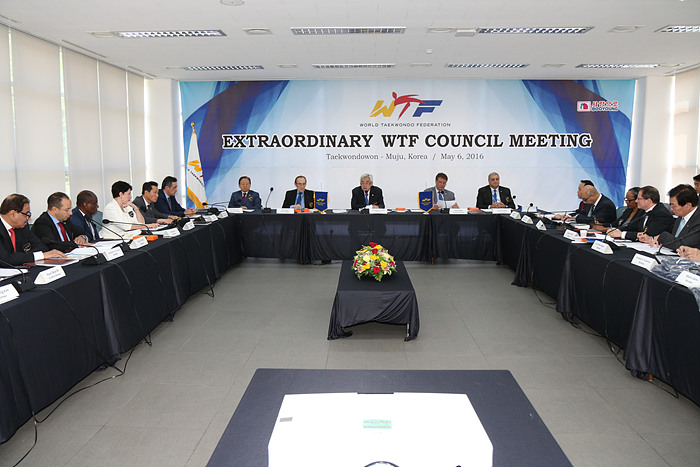 In a meeting presided over by Choue, the Council was briefed on the latest preparations for the biggest event in taekwondo’s calendar, the Olympic Games. Mark Kauffmann, taekwondo sports manager of the Rio 2016 Organizing Committee for the Olympic and Paralympic Games, delivered a progress report. He gave an overview of the Olympic, and the taekwondo training and competition venue.

After a discussion on taekwondo competition uniforms, the Council approved to allow the placement of national flags on pants, as well as permitting colored pants; previously, only plain white uniform pants had been allowed. This change will be applied, for the first time, in Rio.

In other business, an update on the venue and schedule for the 2020 Tokyo Olympics, where para-taekwondo will make its debut, was delivered by Jay Lee, Director of the WTF’s Sport Department.

27 Council members and 2 auditors attended the meeting and all the Council adopted the resolution to demonstrate the united stance of the WTF Council on the matters discussed during the meeting.

In a separate event, Council members held discussions with international coaches and referees who had gathered in Muju for a special workshop and scenario training on taekwondo’s latest rulesets and equipment.

A signboard-hanging ceremony was also held, dedicating the WTF Central Training Center at Taekwondowon. Henceforth, Taekwondowon will act as a control tower overseeing the activities of the six regional centers so far established worldwide in locations as far apart as China, Iran, Azerbaijan, Uzbekistan, Germany and the Great Britain. There will be also a museum created for WTF in Taekwondowon, which will be served as a place where the history of the WTF will be exhibited.