MOSCOW, Russia (August 6, 2017) – The Moscow 2017 World Taekwondo Grand Prix Series 1 drew to a close today with Korea taking both gold medals on offer and a further five different nations sharing the remaining medals in a reflection of the sport’s strength in depth around the world.

“The Moscow 2017 World Taekwondo Grand Prix has been a fantastic competition and I would like to thank our hosts for staging such an excellent event. Over the last three days we have enjoyed some exhilarating taekwondo by some of the world’s very best athletes. We have been glad to see that the rule changes we brought in at the start of this year have continued to encourage athletes to try more dynamic and spectacular techniques. This has led to some very exciting matches with last second twists and turns that makes our sport so enjoyable to watch.”

A summary of today’s action can be found below. The full list of results can be found on the World Taekwondo website. 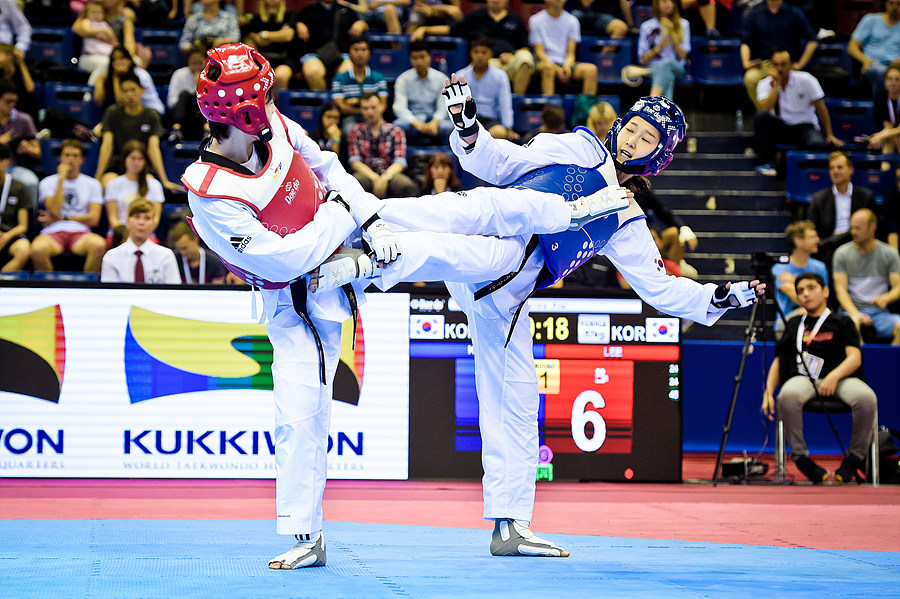 The final of the female -57kg was an all Korean affair with World Champion and MVP Ah-Reum Lee taking on compatriot and bronze medalist in -62kg at the World Championships So-Hee Kim. An early Gam-jeom gave Kim a one point lead but Lee quickly came back into the match and landed three kicks to the trunk protector in quick succession to go 6-1 up. A penalty just before the end of the round saw her take a lead of 7-1. Gam-jeoms from both players early in the second round took the score to 8-2 before Kim closed the gap to four points just before the end of the second round. In the final round Lee stepped up the intensity, landing four excellently executed kicks over the course of the round. Kim managed a well-timed head kick but it was not enough and Lee took the gold medal with a score of 16-9 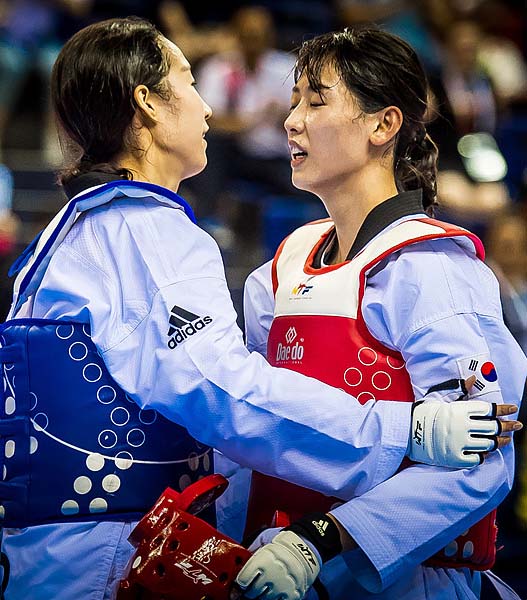 Carolena Carstens from Panama and Raheleh Asemani from Belgium won bronze. Carstens took on So-Hee Kim in the first semi-final. Kim took an early lead and delivered two kicks to the trunk protector to help her towards a first found score of 5-1. Carstens landed a turning kick but it failed to register and she could not stem the tide with the second round finishing 11-3 to Kim. In the final round Kim proved too strong and progressed to the final with a score of 15-5. The second semi-final matched Asemani and Lee. Asemani struggled in the first round as she failed to register a point, while Lee executed three kicks to the trunk protector to take a 6-0 lead. In the second round Lee extended her lead but Asemani got her first points on the board as it finished 10-2. In the final round Lee pulled away landing a series of kicks, including an accurate kick to the head, to win the match 26-6. 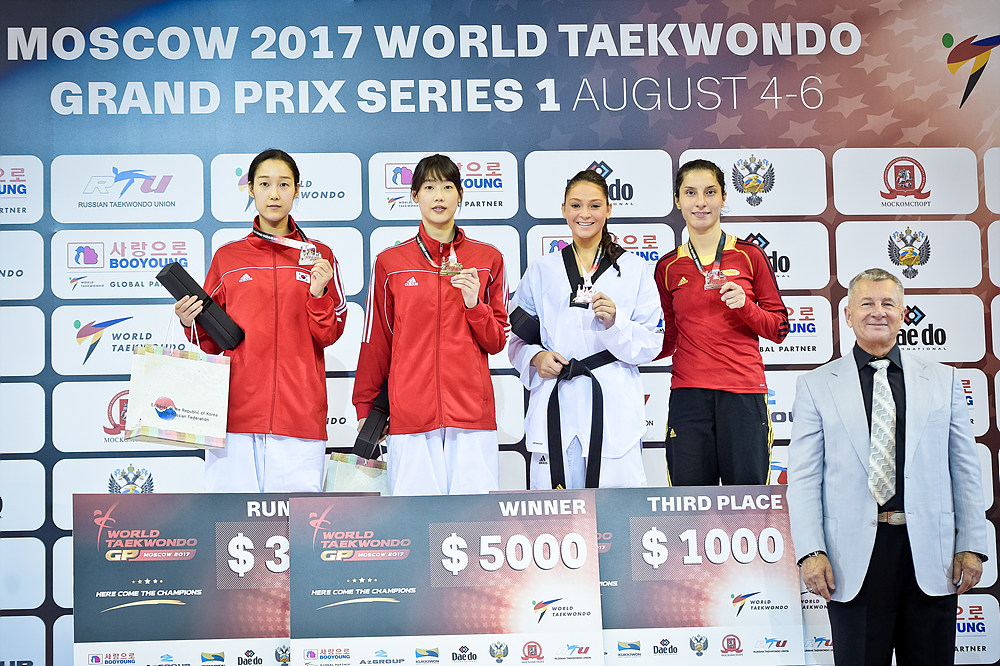 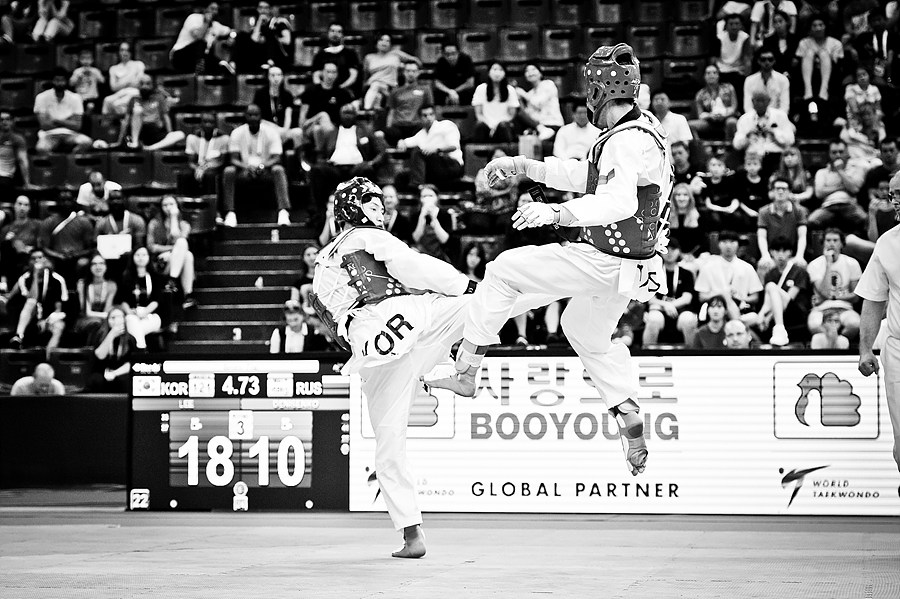 In the final of the male -68kg, World Champion from Korea, Dae-Hoon Lee, took on home favourite, Alexey Denisenko. Lee was clearly unfazed by the strong Russian support for Denisenko and came out flying, landing six kicks to the trunk protector in the first round, helping him towards a 14-1 lead. After the high-scoring first round, the second saw a more measured approach from both fighters and neither were able to register any points. In the final round Denisenko looked to close the gap but for each kick he landed Lee seemed to have an answer. An excellent head kick from Denisenko shortened Lee’s lead to eight points but it wasn’t enough and the final score finished 18-11 to Lee. 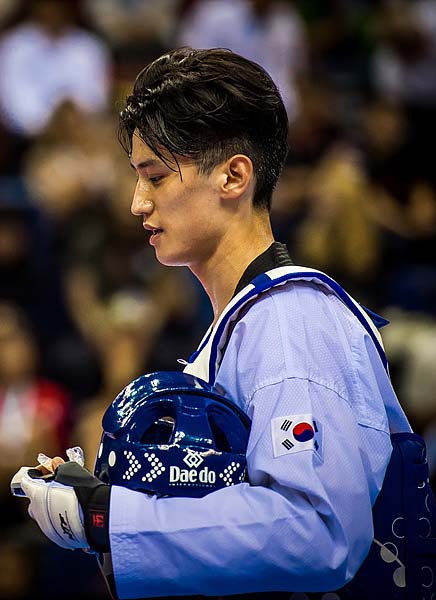 Olympic gold medalist Ahmad Abughaush from Jordan and Christian McNeish from Great Britain won the bronze medals. Abughaush got off to a strong start landing two punches but was quickly pulled back by Lee who combined a kick to the trunk protector followed by a punch. Lee extended his lead in the second round almost immediately with a kick to the trunk protector and then landed another two during the round to finish 9-2 up. In the final round Abughaush looked to close the gap landing a kick early on but Lee followed up with a kick to the head and a punch to extend his lead once more. Despite Abughaush’s best efforts, Lee won the match 19-7.

In the second semi-final, both Denisenko and McNeish led during the first round before it finished all square at 3-3. Denisenko landed two head kicks in quick succession in the second round to take the lead before both McNeish himself landed a head kick but which left himself open to a kick to the trunk protector. The second round finished 12-8. In the final round McNeish came out strongly and landed a kick to the trunk protector followed by a kick to the head to take the lead but he was quickly overtaken again by Denisenko. Despite a series of Gam-jeoms and a strong finish from McNeish, he could not catch Denisenko and the fight ended a very close 17-16 to Denisenko. 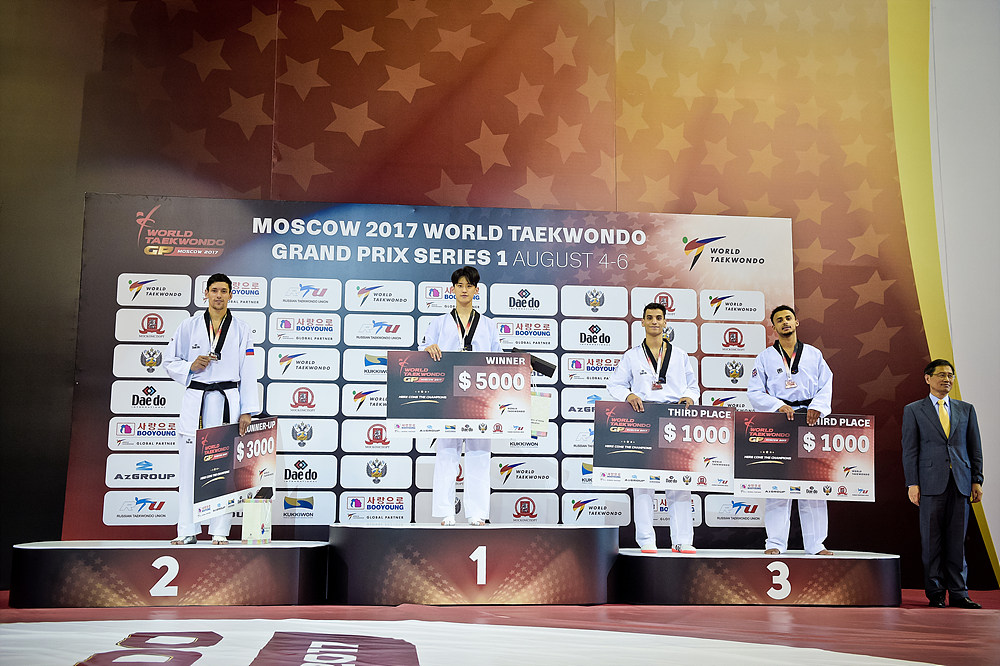 The next World Taekwondo Grand Prix Series 2 will take place in Rabat, Morocco, on 22-24 September 2017.