In the final match of the male -80kg category, Cote d’Ivoire’s Cheick Sallah Junior Cisse had been behind Team GB’s Lutalo Muhammad for the entire match. With the buzzer about to sound to end the match, he unleashed a desperate attack: A jump spinning heel kick to the head of his opponent. It connected. In the very last second, the African star had won his country its first-ever Olympic gold.

Cisse and a roster of the top fighters in what is arguably the most exciting weight category in taekwondo will soon be heading to Muju for the 2017 World Championships showdown. Also expected to fight in are the phenomenal Azeri, Milad Beigi Harchegani; the crowd-pleasing Moldovan spin kicker Aaron Cook; and the legendary American, Steven Lopez, the only fighter ever to win five World Championship titles. 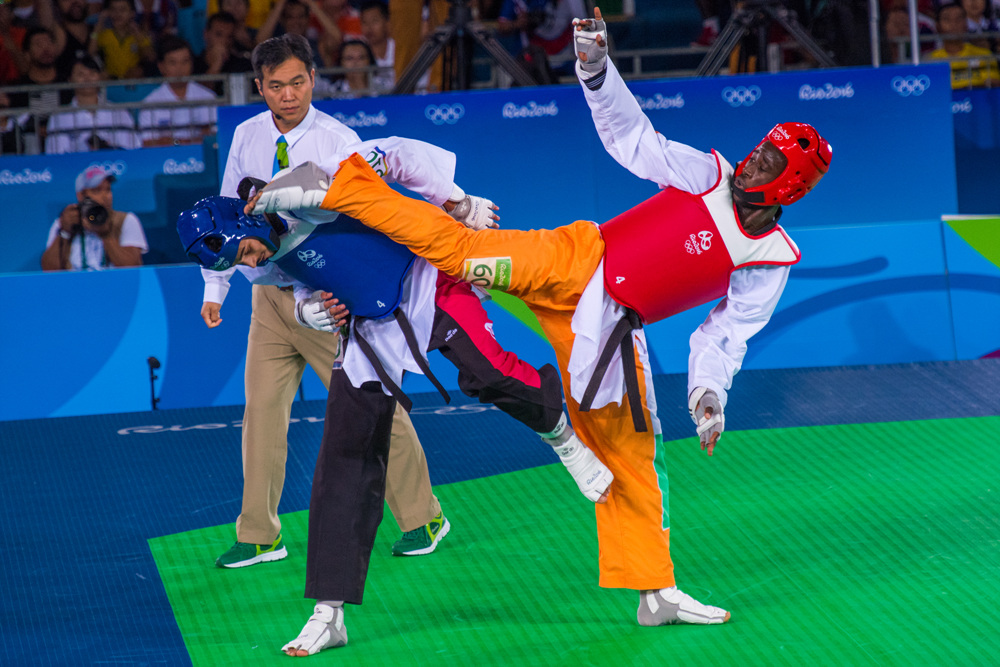 Cisse is a consistent fighter at high-level events, but Rio was his greatest result. Totally fearless, Rio proved that he can never be counted out and is unafraid to launch the most spectacular techniques. Muhammad is bigger and stronger, and his unusual style – backward leaning, with his armed crossed in a side-on, defensive posture, make him difficult to score on.  The bronze medalist at London 2012, Muhammad was devastated at his last-second loss to Cisse. However the two will not do battle in Muju: The Brit will be fighting in the -87kg class. 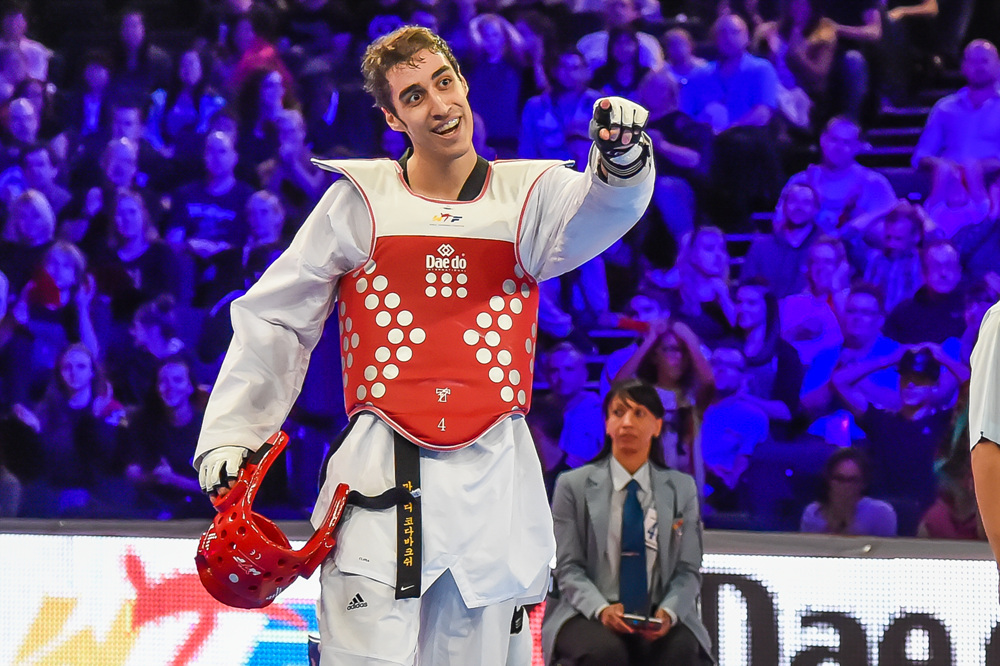 The favorite to win in Rio in the class was Iran’s Mahdi Khodabakhshi. With his long legs, hyper flexibility and relaxed fighting rhythm, he had been dominating the elite Grand Prix series, won the World Championship title in Chelyabinsk, Russia, in 2015, and was the number-one ranked player in the category in Rio – but, in a shock result, failed to win a medal of any color. The ex-Iranian, now-Azeri fighter Beigi Harchegani – who has the same natural, relaxed fighting style, the same long-legged flexibility and even the same age as “The Terminator” – was the author of Khodabakhshi’s downfall. Beigi Harchegani defeated Khodabakhshi in the quarter-finals by point gap, shocking the taekwondo world, and went on to win bronze in Rio, after losing to eventual silver-medalist Muhammad. Beigi Harchegani also looked hugely impressive at the last top-level events of 2017. He won both the Grand Prix Final and the World Team Championship in Baku, Azerbaijan, playing the incredible, gravity-defying ax kick that has led Korean pundits to dub him “God of Taekwondo.“

Meanwhile, rumors have spread that the Iranian may left the game. 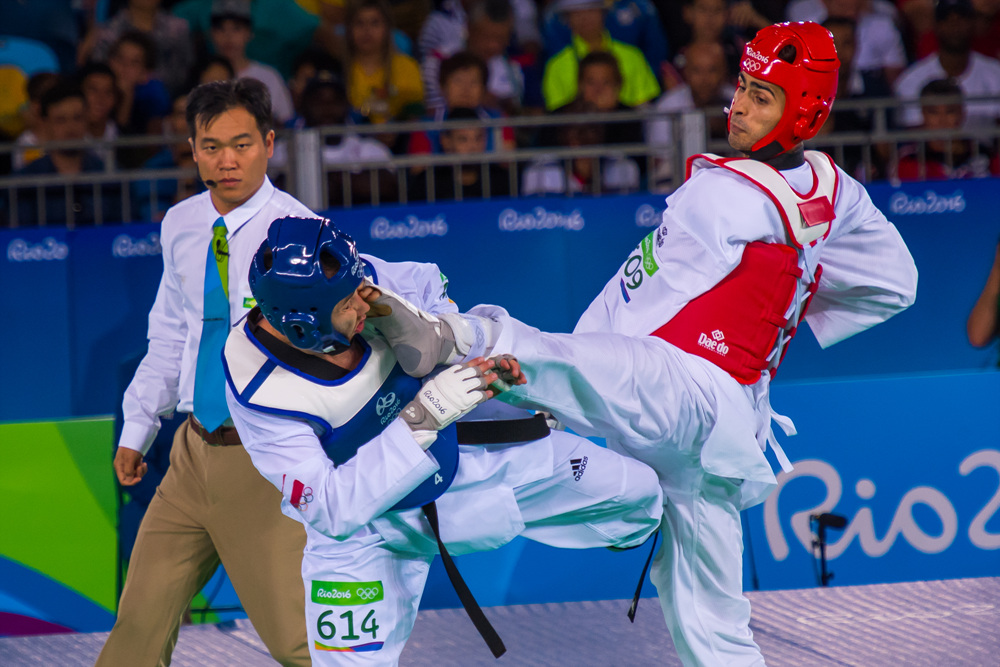 If Beigi Harchegani is the rising star with his eye on his first ever World Championship title, one long-term warrior who has always delighted the crowds but has never won a gold is Moldova’s Aaron Cook. Famed for being inspired by the “Power Rangers;” for his uncompromising, spin-kicking style; and for being at the center of controversy when Team GB declined to select him for London 2012, Cook changed his nationality, fighting first for Isle of Man, then for Moldova.  Cook has been battling in the Worlds since 2007 but his results have never matched his fame.  With his powerful style, every taekwondo pundit agrees he has a weapons-grade skillset, but while the fans always look forward to Cook’s matches, he is one of the unluckiest fighters on the circuit: In major competitions, he has only won one Grand Prix gold, in Suzhou, China, in 2014. The question in Muju will be whether he can overcome his limitations – his short height (which will be compensated for by the new rules, which favor short, aggressive players) and his run of bad luck in major competitions. 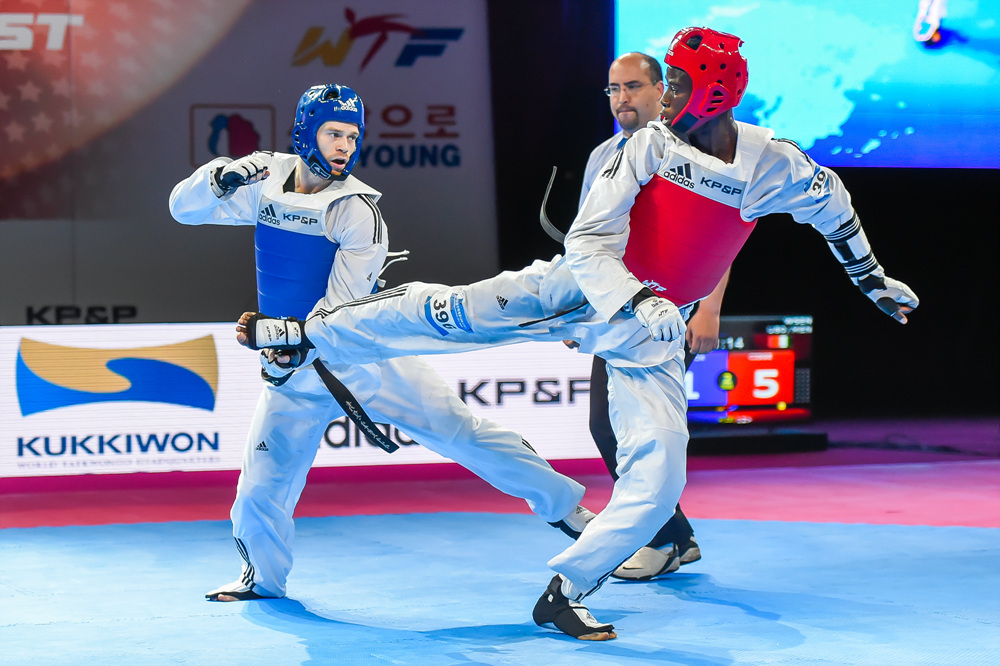 The fighter who Team GB selected over Cook in 2012 – prompting Cook’s odyssey in search of a new home – is Rio silver medalist Muhammad. But with Muhammad likely to fight in the -87kg category, Team GBs Damon Samson is likely to face off against Cook. Samson lost on point gap to a dominant Khodabakhshi in Chelyabinsk in 2015, after defeating Cook in the preliminaries.

Then there is Lopez. The only fighter ever to win five World Championship titles, he will be the oldest player in the competition – he is just shy of 40 – and is a taekwondo legend. But he has not won a major championship since 2011.  Whether his vast experience and tremendous spirt will be enough for him to prevail over the younger guns in this ultra-competitive category is a major question.

But however the pundits see it, the male -80kg category looks set to light the stadium on fire when battle commence in Taekwondowon in Muju, this June. Stay tuned!